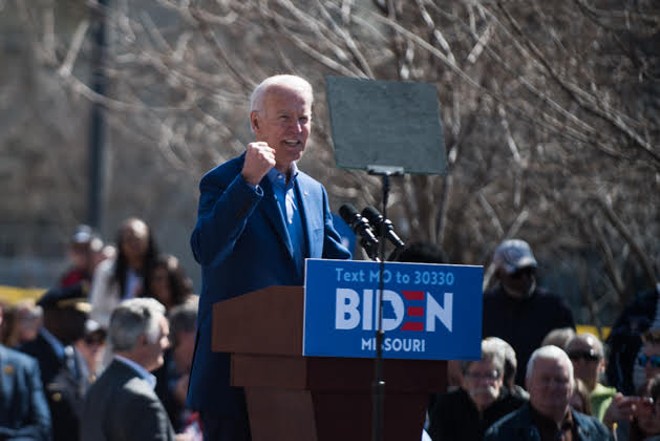 Biden and Senator Bernie Sanders both dropped by St. Louis in the lead-up to today's presidential primary. And while Sanders drew the bigger and arguably more enthusiastic crowd (near capacity at Stifel Theatre on Monday morning), the election watchers at the Associated Press called today's contest for Biden shortly after the polls closed.

Biden rallied hundreds of his supporters — along with a contingent of protesters — on Saturday morning at Kiener Plaza Park during a late-game swing through Missouri that included a Saturday afternoon stop in Kansas City. He had recently emerged from Super Tuesday with some key victories and a growing cache of delegates.

A fraction of the precincts had reported by 8 p.m., but Biden was winning decisively, according to unofficial tallies on the Secretary of State site. Missouri was one of five states holding primaries today, with most of the attention on Michigan, where Sanders defeated Hillary Clinton during the last presidential election. Biden won there, too, according to AP.

It was an eventful day of voting in St. Louis. New City School canceled classes over a coronavirus scare (a parent of a student was tested, and the test has since come back negative), but announced it would still open its dining hall as a polling site.

And at a polling site in the Wells-Goodfellow neighborhood, a deranged man intentionally backed his car into a fence at Friendly Temple Baptist Church on Dr. Martin Luther King Drive. The 62-year-old then went inside where he shouted threats and doused a poll worker and voting machines with water, according to police. He was taken into custody and transported to a hospital for evaluation.

Election workers hurried to move their operation down the street to another site, where voting resumed after about 45 minutes.