Joe Edwards: A Man and His Orb 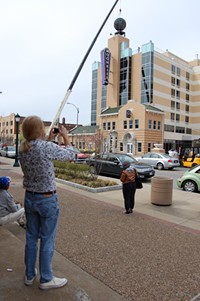 Joe. Moon. Moonrise.
What do you get the man who has everything? Why, the moon, of course!

And that's just what Joe Edwards -- impresario extraordinaire -- received today when crews hoisted a 3,000-pound orb atop his latest project, the Moonrise Hotel in the Delmar Loop.

Edwards had south city's Creative Visions design and build the model, which has both a light and dark side and will spin from a pedestal on the ninth floor of the building. The luxury hotel is set to open April 17.

The moon-rising was well attended by media folks, perhaps because its not often you see a moonrise in the middle of the afternoon and perhaps, too, because inimitable broadcaster-turned-PR-maven Kathryn Jamboretz organized the affair.

Follow the jump to see a mesmerizing video of the event that, well, kind of leaves you hanging.