He had previously pled not guilty in June after an unsealed indictment revealed he and three former aldermen accepted cash bribes, cars, an iPhone and other gifts in exchange for political leverage.

Collins-Muhammad was released on a pre-trial bond. His attorney, Joseph Flees, pointed out to the judge that Collins-Muhammad has no history of violence and doesn't pose a flight risk, saying "he is simply working in the community to provide for his family at this point."

On July 22, Collins-Muhammad waived pre-trial motions after reaching a plea agreement with prosecutors. Pretrial Services Supervisor Dan Fall says that the former alderman had no bond violations and no violations of pretrial release.

Fall also noted that Collins-Muhammad had been working in an Amazon Warehouse in East St. Louis and a Macy's department store.

His co-defendants, former Board of Aldermen president Lewis Reed and former Ward 22 alderman Jeffrey Boyd, are also expected to plead guilty this week. Both have hearings on Friday and have resigned from their posts.

An unsealed federal indictment in June revealed a years-long pay-to-play scheme involving the three former aldermen and a man referred to as “John Doe.” Properties mentioned in the indictment belonging to Doe correspond to gas stations and convenience stores owned by Mohammed Almuttan.


Prosecutors allege Collins-Muhammad, Reed and Boyd accepted thousands of dollars in cash and gifts in exchange for helping Almuttan.

According to the indictment, Collins-Muhammad accepted thousands of dollars in cash and campaign contributions, a new iPhone 11 and a 2016 Volkswagen sedan from Doe. Reed also allegedly accepted cash payments and donations for his 2020 campaign for mayor.

In addition to his two bribery charges, Boyd faces a separate, two-count wire fraud indictment for a 2021 scheme in which Boyd allegedly sought $22,000 from his insurance company for damage to vehicles that were not his. Court filings suggest he may plead guilty in that case also. 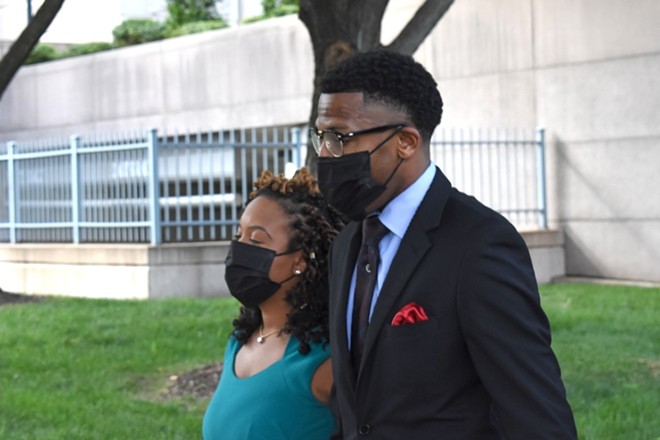 Collins-Muhammad rose to political prominence in 2017 when, at 25, he became the youngest person ever elected to the Board of Aldermen. He represented Ward 21 in north St. Louis until his resignation in May.

Laura Keys was elected earlier this month to serve the remainder of Collins-Muhammad’s term.

Former St. Louis Metropolitan Police Department assistant police chief Lawrence O’Toole wrote a letter to Judge Stephen Clark in support of Collins-Muhammad. O’Toole retired in May after settling a lawsuit with the city. He claimed the city discriminated against him, a white male, by passing on him for police chief.

“Like everyone, I was shocked by the revelations of this wrongdoing; it simply did not conform to the individual I knew as the Alderman from the 21st Ward,” O’Toole wrote. “While I certainly do not condone the breach of public duty, I can say that this wrongdoing does not represent the complete man or the man I knew.”

Mayor Tishaura Jones issued a statement Tuesday saying she’s proud to be on Collins-Muhammad’s “shit list.” The former aldermen told Almuttan “I’m on Tishaura’s shit list, and she’s on mine too” after Jones vetoed his corrupt attempt to secure tax abatement for Almuttan.

“While that’s one list I’m proud to be on, the former alderman’s actions outlined in his federal indictment have embarrassed St. Louis and our city government,” Jones said.

The federal corruption charges against Collins-Muhammad, Boyd and Reed have “shaken” St. Louisans faith in their government, Jones added.

"It’s time to turn the page on the past and move on from the failed status quo,” she said.

This story has been updated to include comment from St. Louis Mayor Tishaura Jones.