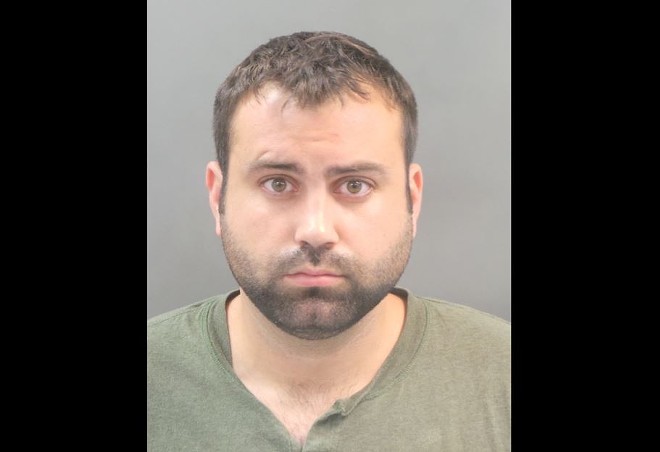 Mugshot via SLMPD
John Wells, the accused Tower Grove Groper.
John Wells, a 30-year-old man listed in court records as "homeless," is facing four criminal charges in connection with a spree of sexual assaults in Tower Grove South over the past two months. According to a police press release, Wells has been charged with attempted sodomy, two misdemeanors for sexual abuse and a third misdemeanor for assault.

Wells is currently behind bars on a $50,000 bond. If convicted on all counts, Wells could face more than six years in prison — however, his final punishment could also be much lower depending on how prosecutors choose to handle the case.

Notably, Wells is not being charged for an alleged assault in Benton Park on June 10, an attack that seemed to follow the same pattern as the other forced gropings reported in Tower Grove South.

Additionally, Wells appears to be the same man captured on surveillance footage while allegedly attempting to follow a woman into a Soulard home in September. At the time, the St. Louis Post-Dispatch reported that the surveillance camera showed a culprit pursuing a second woman and trying to grab her around the waist — a move that sounds remarkably like the M.O. of the accused Tower Grove groper.

We've reached out to the St. Louis Metropolitan Police Department for comment about the earlier incident in Soulard, and we'll update the post if/when we hear back.

Here's the full text of the police press release.

Today the Circuit Attorney's Office issued warrants for Attempt Sodomy 2nd, Assault 4th and two counts of Sexual Abuse 2nd against John Wells, 30-year old male, in connection with the below incidents. A judge ordered the suspect be held on a $50,000 cash-only bond. His booking photo is attached.

Incident: Sexual Misconduct 2nd
Location: 3500 block of Roger
Neighborhood: Tower Grove South
Date/Time: 6/21/17 @ 10:05
Victim: 32-year old white female
Suspect: White male, 30-35-years old, approx. 6’02”, 160 lbs., wearing red shirt and khaki pants
The victim was walking in the above area when the suspect approached her from behind and grabbed her bottom. The suspect then fled the scene and entered an older-model silver SUV, which fled east in the alley. The investigation is ongoing.

Incident: Sexual Abuse 2nd Degree
Location: Roger/ Connecticut
Neighborhood: Tower Grove South
Date/Time: 6/16/17 @ 15:50
Victim: 53-year old white female
Suspect(s): White male, middle-aged, approx. 5’8"- 5’10", medium/stocky build, short black hair, wearing a tan/white shirt and khaki shorts
The victim stated she was walking south on Roger when she observed an individual with a vehicle parked in an alley. As she continued to walk she felt someone grab her from behind. When the victim turned around, the suspect fled toward the alley. The victim yelled and followed the suspect, who then got into the vehicle, a 4-door SUV possibly silver, white or tan in color, which fled eastbound through the alley toward Gustine. The investigation is ongoing.

Incident: Sexual Abuse 2nd Degree
Location: 3200 block of Oak Hill
Neighborhood: Tower Grove South
Date/Time: 06/16/17 1000
Victim: 25-year old white female
Suspect: Middle Eastern male, 30-40 years old, medium complexion, short black hair, 5’10” 160 lbs., wearing sunglasses, brown polo-style shirt, brown shorts and sandals
The victim stated she was walking south on Oak Hill when the suspect approached from behind, reached up her dress and grabbed her private area. The suspect then ran back to his vehicle, a gray SUV, which was parked in the alley. Victim was not physically injured. The investigation is ongoing.

Incident: Assault 4th
Location: 3200 block of Bent
Neighborhood: Tower Grove South
Date/Time: 5/25/17 @ 15:49
Victim: 30-year old white female
Suspect: White male, 25-35-years old, average build, 200-220 lbs., tribal tattoo on left bicep, dark short buzz cut, wearing navy blue t-shirt, khaki shorts and sunglasses
The victim stated she was walking her dog southbound on Bent when she observed the suspect occupying a champagne colored SUV parked in the north alley of Utah. The suspect exited the vehicle, approached the victim from behind and reached his hand down the rear of the victim’s pants and grabbed her behind. After a brief struggle, the suspect fled on foot and entered his vehicle, driving westbound towards Morganford out of sight. The investigation is ongoing.