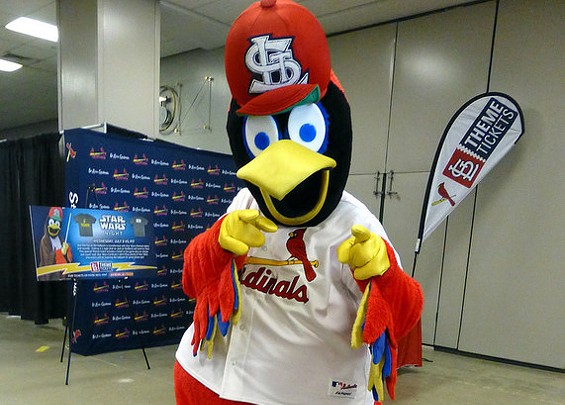 Neither did anyone else. But thanks to The Daily Show, all of America has the image of a patiently voyeuristic Fredbird burned into its collective consciousness.

The beloved mascot of the St. Louis Cardinals got caught in the crosshairs as The Daily Show's Jon Stewart launched one of his famous food-pride rants against the entire city of Philadelphia.

After railing against Philadelphia Phillies manager Ryne Sandberg for getting sick from a Shake Shack burger from Citi Field, the New York Mets stadium, Stewart attacked all things Philly: cheesesteaks, Rocky, the Liberty Bell and, of course, the Phillie Phanatic.

"It's a city so famously shitty, no animal would represent its baseball team, forcing you to go with this fucked-up, Jim Henson-reject-looking piece of shit," Stewart said Tuesday night.

See also: Who Would Win in a Fight Between Fredbird and the Dirt Cheap Chicken?

Stewart seemed to regret hurling abuse at the Phillies strange mascot Wednesday, but his apology revealed more about Fredbird and the Miami Marlins' mascot, Billy the Marlin, than anyone ever wanted to know.

"I apologize if I offended Mr. Phanatic. I know how difficult your life has been since that sex tape came out," Stewart says as this image comes up onscreen: 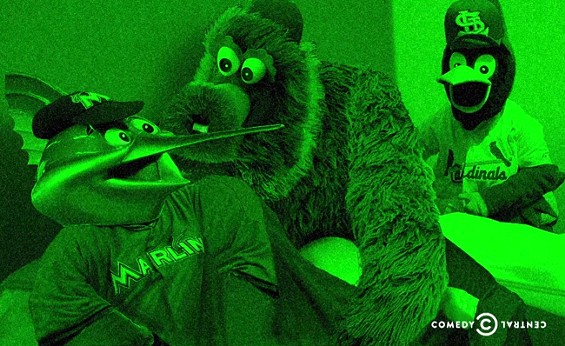 "Seriously, was that just the Cardinal mascot in the corner pleasuring himself?" he asks the crowd, laughing. "I don't know where that guy got in there."

But hey, if Fredbird is going to get freaky with it, at least he's doing it with class. As the entertainment website Uproxx puts it, "even in group mascot sex, the St. Louis Cardinals mascot is the classiest animal in the room, always allowing the guy before him to finish before he jumps in to bang the giant fish."