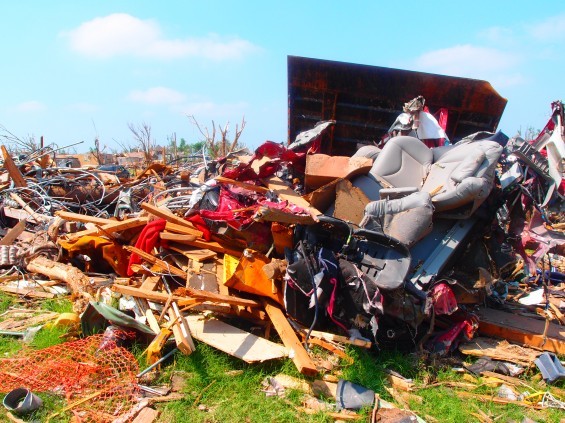 Albert Samaha
The mangled wreckage of a red car illustrates the tornado's merciless power. The vehicle's other half was found nearly fifty yards away.

EDITOR'S NOTE: The Riverfront Times' Albert Samaha traveled to Joplin this weekend, three weeks after the southwestern Missouri city was struck by the deadliest tornado to hit the U.S. since 1936. For additional pictures, check out our companion slideshow: Joplin Tornado Three Weeks Later

The woman's son died in the tornado that tore through Joplin May 22, and she wants closure. Finding his red Honda Civic would help, she thinks. So April Lundstedt, an agent at American Family Insurance, roams the neighborhood just north of St. John's Regional Hospital, determined to locate the car for her.

This neighborhood is where the tornado lingered. The houses are gone, blown from their foundations and smashed into bits. Trees stand naked, stripped of branches and bark. And the cars...Jesus, the cars. They lie crushed in unrecognizable heaps of glass and metal, door handles and bumpers and engines ripped away like Lego pieces. Lundstedt sees red metal flashing in the sunlight. Can this be the Honda? She approaches it, craning her neck to spot its VIN. But the car is too mangled. The roof and door are missing, and all that's left are the back seats and back tires, stirred into a pile of bricks and wooden beams. Or are those the front seats and front tires?

And then over there, perhaps 50 yards away, is another piece of shiny red metal. The other half of the car -- all that's left of it: two wheels and crumpled metal. Lundstedt can't even tell what make it is.

It's been three weeks since the tornado hit Joplin, but it looks like it could have happened yesterday. Mounds of debris are piled where houses used to stand, and since it all must be moved to the sidewalk before the U.S. Army Corps of Engineers (designated the task by FEMA) can clear out the few remaining bones of a house, volunteers rummage through the carnage. They separate valuables and potential keepsakes from the trash and then sort the trash by material -- wood over here, brick over there, metals over here, electronics over there. Everything is so twisted and mangled, it's like trying to separate the strawberries from the bananas in a smoothie.

Albert Samaha
An entire neighborhood thrown into a blender, houses blown from their foundations and smashed to bits. Nothing but carnage as far as the eye can see.

A powerful intimacy comes with rummaging through the carnage of what-used-to-be-a-house - an empathetic rush that erases any detachment from the victims of catastrophe. There are real lives, stories and lifelong memories strewn on the grass and the dirt for all to see, and the anonymously tragic figure becomes a real person, or at least a composite of his material possessions. He wears Calvin Klein ties. He reads Sports Illustrated. He's a Kansas Jayhawks fan. He watches Monsters Inc. And yet, standing here eyeing his things, you don't even know if he is alive or dead.

The terror and chaos of the tornado lasted six minutes. The psychological effects, obviously, will last much longer. However, it is the logistical and practical problems left in the tornado's wake that seem particularly daunting today. Minutiae that seems so trivial in the midst of death and ruin still must be dealt with; debris must be cleared. Already unconfirmed reports have emerged of landlords taking the money given to them by the federal government to pay for the cleanup and bouncing right out of town, never to be heard from again. Lynn Onstot, Joplin's public information officer, asserts that those odious property owners will be tracked down and held accountable. But, like any disaster zone, the city is a disorganized mess for now, and many tenants are left stranded.

The heavy machinery won't come until the debris has been moved to the sidewalk, by hand, and yet some pieces of debris are too big and too heavy to move to the sidewalk by hand. Some people, upon seeing their houses destroyed and their possessions lost, fled to begin their lives anew. Spray painted in black on one house were the words, "Moving to Florida. So long Joplin :)."

Albert Samaha
Haunting images litter the city. Did the owner of this doll survive the storm? No one knows.

And then there are the looters.

"They started going through the rubble while people were still crawling out of houses," says Marvin Holbert, a Joplin resident who remains on unpaid leave from his job at General Mills to volunteer for the relief effort.

Holbert was one of the first first responders. He threw his rain coat over a dead body. He looked people in the eyes as they laid buried and trapped under the remains of their homes, pulled them out and carried them to safety. And all the while he was running around town, looking for lives to save in the hours following the tornado, he saw and heard the looters strike.

One brought his truck and chained cars to the back of it, and then chained more cars to the backs of those cars and so on, before dragging his clunky train off into the night, Holbert recalls. So Holbert and a bunch of others got together and protected the town in the subsequent nights - roaming bands of young and old, men and woman, shining lights and honking horns, chasing away the thieves as best they could. "It was all these people coming together," he says. "Lineman on the football team and the pot-smoking kids with piercings, guys who never hung out before, all riding around together, trying to protect their town. Kick one, and they all kick you back."

Since May 22, 30 cars have been reported stolen, according to the Joplin Police Department, which is more than double what the town usually gets in a month. Police Corporal Chuck Niess says he never heard about the thief who chained cars to his truck. But he does say that 50 people were arrested for looting within two weeks of the tornado.

Some victims worry that the valuables that weren't blown away by the storm are ripe targets for pillaging. One woman stands in what used to be her living room. Now it's just a wooden platform covered with nails and bricks. Not a single wall of her home remains standing. She wanders around the destruction zone, looking for personal items. More than anything else, though, she wants to find a blue Royals jersey, the one her son wore when he proposed to his wife. She's been searching for nearly three weeks.

Several volunteers rummage through the mess. One whispers to another, "I hope we find it, but that thing could be on the fourth floor of the hospital. I mean, the truck that was in the front yard went twenty yards that way."

After about an hour, a few of the volunteers decide to help out another woman across the street. One of them walks down what seems to be a driveway and something catches his eye. He bends down and pulls a blue Royals jersey from under a pile of wooden planks and concrete cinder blocks. The woman cries when she is handed the jersey, covered in dirt but remarkably intact.

For more pictures from Samaha's trip, and a chilling view of what Joplin looks like three weeks after the tornado, check out Joplin Tornado Three Weeks Later.