The Seattle Mariners revealed on Monday the seven candidates they plan to interview to become their next manager. 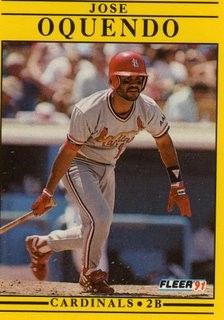 Normally the hunt for a new skipper for one of the worst teams in baseball would mean squat outside the Pacific Northwest.

However, since beloved Cardinals third base coach Jose Oquendo happens to be one of the magnificent seven, the thought of the scrappy super-utility man (for the uninformed, Oquendo is famous for playing every position, including pitcher, in the course of his ten-year playing career), leaving the nest has the hearts of Cards fans a-flutter.

I must say, as lifelong M's fan (and impartial observer of the Redbirds since moving to St. Louis), Jose should tell the Mariners to take their job and shove it.

If Oquendo takes the job he's setting himself up for failure.

That plan is all well good except for the fact that there's a reason the M's lost 100 games despite having $100 million payroll. While they have a handful of budding stars on which to bank their future (including Felix Hernandez, Brandon Morrow, and slugging catcher Jeff Clement), their roster and payroll is stocked with the likes of Carlos Silva, Miguel Batista, and a poo poo platter of underachieving and washed up position players. Except for the incomparable Ichiro, there ain't a lot for a head coach to work with.

Oquendo definitely has managerial chops: he's coached Puerto Rico's national team for the past two years, has some hands on knowledge about every position, and coaches third base well enough to keep his job. But rather than become a "future scapegoat" as some jaded Mariners bloggers (with whom I empathize) are already predicting, Oquendo should wait until a better job becomes available. Perhaps when certain Hall of Fame manager decides to leave his post in a certain Budweiser-loving city, the time will be right.

And as for my M's? They ought to opt for their own local legend (who's not on the list): Edgar Martinez.