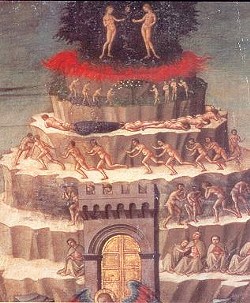 Purgatory or Farmington, Missouri?
Joseph J. Miller isn't going to garner sympathy from most folks, and I'm certainly not defending the man. Still, I think it's curious how people like him can remain incarcerated in Missouri after they've served their so-called "debt to society."

As the Missouri Attorney General Office announced this morning, the 61-year-old Miller could spend the rest of his life locked up even though he recently completed his 15-year sentence in prison. Miller's crime? He's been convicted of being a "sexually violent predator", which under Missouri's Sexually Violent Predator Act allows him to be confined indefinitely following his prison sentence.

As his sentence neared completion in 2006 the State of Missouri filed a petition asking the court to label Miller as a sexually violent predator. Four years later a St. Louis County jury agreed, ruling this month that Miller is a threat to society and should remain locked up.

"We must keep those who demonstrate a likelihood of committing further violent sexual acts off the streets and away from those they could harm," said Missouri AG Chris Koster in a statement today. "It is important for individuals who are deemed sexually violent predators to get the help they need while the community is protected."

Under the law first established in 1999, those committed by the court as sexually violent predators go into the custody of the Department of Mental Health in a secured, dorm-like treatment facility in Farmington. They have the right to have their cases reviewed annually to determine if they're cured of their abnormality and free to enter back into society.

The chance of that happening, however, is next to nothing. As Department of Mental Health spokesman Bob Bax tells me today: No one labeled a sexually violent predator has ever been deemed fit to re-enter society and allowed to leave the treatment facility.

Miller is the 11th such sexual predator committed this year in Missouri and will join 146 other people now in purgatory custody down in Farmington.