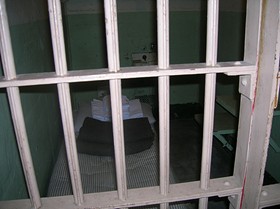 flickr.com/photos/ken_mayer
An innocent man comes to terms with folks who took 16 years of his life away.
Josh Kezer, exonerated in 2009 after serving 16 years in jail for the infamous murder of Angela Mischelle Lawless, has settled his suit against Scott County and some of its former law enforcers.

According to Kezer's attorney, Charlie Weiss of Bryan Cave LP, the terms of the settlement will not become public, but Kezer will be getting "several million."

You probably remember this case (or maybe you saw it on CBS's 48 Hour Mystery).

In 1992, Lawless was shot thricely and left to rot in her car on I-55 near Benton, Missouri. Scott County law enforcers arrested Kezer, but according to the civil complaint he filed against them, they did so based on unreliable information and suppressed evidence in the process.

Thanks in part to an excellent, in-depth feature run by Post-Dispatch in 1997, Kezer's case was revisited. He was released last year. Richard Callahan, then a Cole County judge, said at the time that:

"There is little about this case which recommends our criminal justice system. The system failed in the investigative and charging stage, it failed at trial, it failed at post-trial review and it failed during the appellate process."

Weiss recalls that on the day Kezer was released, the very first thing he wanted to do (literally, upon driving away from the jail) was to thank the judge.

When he did, the judge counseled the man to go to college. Weiss tells Daily RFT that Kezer has already taken the judge's advice and completed an accounting course at Columbia College. He plans to pursue a college education, Weiss says.