Joshua Hackman, Allegedly Points Gun at Police, Gets Shot and Charged with Trafficking in Drugs 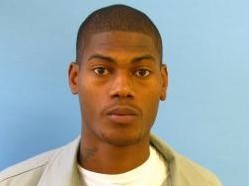 Joshua Hackman's mug shot from 2010.
Police officers were in the 4500 block of Davison Avenue in the Walnut Park East neighborhood around 7 p.m. Thursday night when they spotted a suspicious character and attempted to talk with him. The suspect ran, and the police gave chase on foot. One officer saw him throw a bag of something on the ground, which the officer then sought. The second officer maintained pursuit, while the suspect drew a semi-automatic pistol, according the police incident summary.

The officer ordered him to drop his gun, an order the suspect refused. Instead, he pointed his gun at the officer, at which point the officer fired his own gun, dropping the suspect with critical injuries.

This afternoon, police identified the suspect as Joshua Hackman, a 23-year-old black man. Laboratory tests determined that the bag Hackman allegedly threw away contained more than two grams of cocaine base. St. Louis City Circuit Attorneys today filed charges against Hackman of one count of trafficking in drugs/attempting to traffic in drugs, one count of unlawful possession of a firearm, and two counts of unlawful use of a weapon.

Hackman has prior convictions for fraudulent use of a credit or debit device (2009), first-degree burglary (2009), stealing motor fuel (2009) and first-degree robbery (2010). He remains in the hospital with critical injuries.

The officer who shot Hackman has been placed on paid administrative leave while the shooting is investigated, which is standard procedure in an officer-involved shooting.