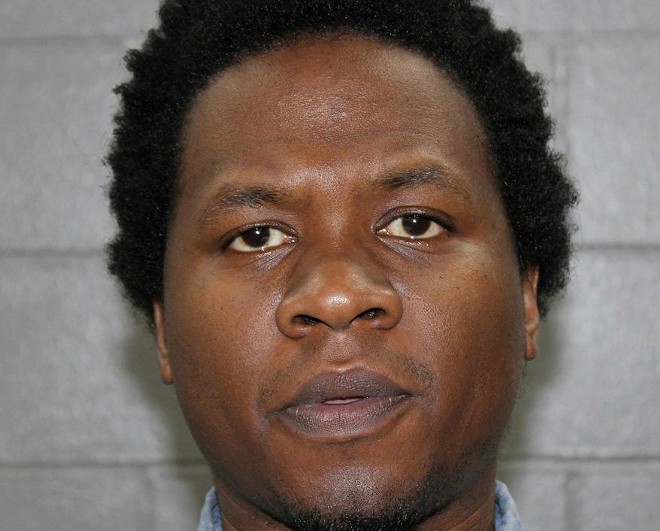 The threats were part of the St. Louis native's bonkers campaign to terrorize an ex-girlfriend.

Thompson, 32, harassed the woman for months after she ended their relationship in the summer of 2016. The bizarre onslaught that followed included revenge-porn-style threats to release nude pictures of her, vile anonymous emails to her bosses and eventually attempts to frame her in the hoax bomb threats.

The former reporter for The Intercept news site was arrested in March in St. Louis and pleaded guilty in June to charges related to cyber stalking and the bogus threats.

“Today, Juan Thompson was held to account and justly punished for his efforts to harass an ex-girlfriend by sending disturbing and dangerous hoax threats to Jewish Community Centers and other organizations across the country in her name," acting U.S. Attorney for the Southern District of New York Joon Kim said in a statement. "Thompson’s harassment and threats caused severe distress to both his victim and to Jewish communities around the country. We thank our partners at the FBI for their excellent work on this important case.”

Thompson had been hoping for a sentence of three years and had agreed not to contest anything beyond three years and ten months. But U.S. District Judge Kevin Castel instead gave him five years in prison, followed by three years of supervised release.

At one time, Thompson was a rising talent in the journalism world. He parlayed internships in Chicago into a job at The Intercept, the site started by Glenn Greenwald and best known for its cache of documents leaked by former national security contractor Edward Snowden.

But Thompson was fired in January 2016 after the site's editors discovered he was making up sources. In response, he claimed the editors were racist and made some pretty dubious claims about having cancer.

The Riverfront Times published a cover story about Thompson in February 2016. We uncovered even more lies and traced a pattern of deceit back to his college days. He was furious, and put his fabrication skills to work defaming the story's author. (See our story about the harassment that followed.)

His smear campaign against his ex-girlfriend began in the summer of 2016.

The woman had dumped him on July 26. So, naturally, Thompson posed as a producer of a national news organization the next day and sent her boss an email, claiming the woman had been stopped for drunk driving and sued for spreading sexually transmitted disease.

That's how it began, and it would only get weirder and uglier from there.

During the next seven-plus months, the woman received anonymous emails with nude pictures of herself and threats to release them. She learned her bosses were getting not only emails but faxes, sometimes with pictures of her. Some accused her of being anti-Semitic. Another said she had threatened to kill Thompson.

He kept multiple fake email accounts humming in those days, even after St. Louis and New York City police told him to stop bothering the woman.

In October 2016, three months after the woman dumped Thompson, he sent an anonymous message to the National Center for Missing and Exploited Children that tried to paint her as a pedophile.

The FBI was later able to trace the unique internet protocol address to Thompson in St. Louis.

The woman got a restraining order. She renewed it and renewed it again. And still Thompson's attacks continued.

He seemed to be inspired by the wave of bomb threats against Jews that was sweeping across the nation at the time. He emailed some threats and called in others, using a device to disguise his voice in at least one case, authorities say.

The threats in his name were a complicated attempt at a reverse frame job, according to the FBI. He was apparently trying to make people think that the woman was framing him, a convoluted move he supported with a series of Twitter postings in February.

"Know any good lawyers?" he tweeted on February 24. "Need to stop this nasty/racist #whitegirl I dated who sent bomb threat in my name & wants me to be raped in jail."

A week later, FBI agents and St. Louis police raided Thompson's grandmother's house and arrested him. He has been locked up ever since.