Judge Orders Return Of 252 Animals: "No Credible Evidence" of Abuse 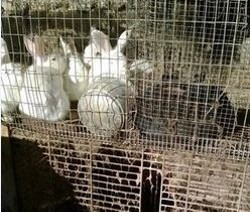 One of the more troubling instances of mass animal abuse reported in Missouri has taken a turn for the confusing.

Describing living conditions as overwhelmed with feces and neglect, the Humane Society of Missouri touted the rescue and its cooperation with the Franklin County Sheriff's Office, which charged Velma Muessemeyer, 75, with 21 counts of animal abuse.

But a December 19 ruling by a Franklin County associate circuit judge has thrown a wrench into that narrative: Judge David Tobben found the civil side of this case unsubstantiated and ordered that all 252 animals be returned to Muessemeyer. Criminal charges are still pending.

HSMO
Rabbits on Muessemeyer's property were housed in cages steeped in feces, says the Humane Society.

HSMO spokeswoman Jeane Jae says the organization plans to file suit to retain custody "to ensure the welfare of these animals."

This isn't the first time the Humane Society has dealt with Muessemeyer. It rescued over 150 animals from her property in 2010. At the time, Franklin County prosecutors agreed to drop animal-abuse charges if she agreed to probation and to own no animals other than two dogs, a guinea pig and a few others. That probationary period ended in 2012.

But in his December ruling, Judge Tobben concluded from the evidence that the property was just very, very messy. From his ruling:

The State's evidence tended to show that Mrs. Muessemeyer's property is very unkempt. If the issue were the propriety of taking children into custody based on the condition of the property, there is no question in the court's mind that the condition of the property, especially the house, justifies such action. The issue is not neglect of children however, it is neglect of animals.

Statements from the Humane Society made after the November rescue of the animals, however, described contaminated drinking water and overcrowded rabbit cages with piles of feces more than a foot deep.

"I think what was initially leaked about the case was wrong," says Taylor Goodale, Muessemeyer's attorney.

Continue reading for more from Muessemeyer's attorney, who is trying to save her from criminal charges.