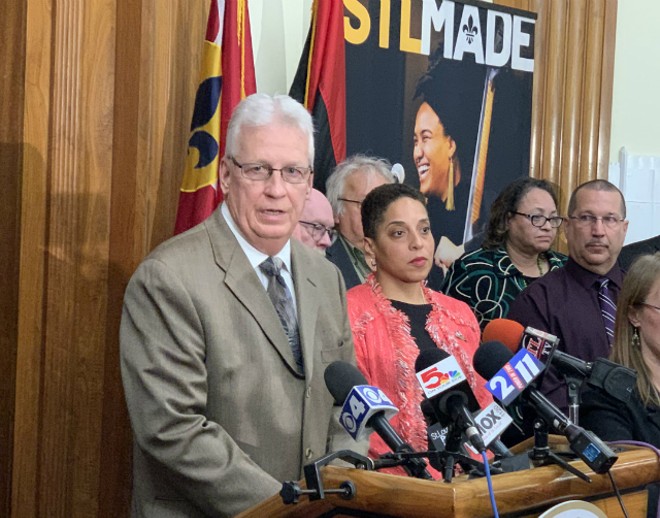 Citing a "resurgence" of coronavirus cases in St. Louis, Judge Rex Burlison, the presiding judge of St. Louis City's 22nd Judicial Circuit, has ordered a suspension of evictions through September 1.

The formal order comes days after a temporary freeze was put in place through an agreement between Burlison and St. Louis City Sheriff Vernon Betts, whose deputies enforce the eviction orders. On Tuesday, Betts announced that he would halt eviction enforcement.

In an earlier letter sent from Burlison to Public Safety Director Jimmie Edwards, the judge included the names of 75 people scheduled to be evicted by Friday, the St. Louis Post Dispatch reported.

The issue has also risen to the office of the mayor: In the city's daily COVID-19 update on Wednesday, Mayor Lyda Krewson said her staff had identified 44 families or individuals facing eviction this week.

She said only one case involved a tenant who had applied for federal assistance.

Indeed, the pending eviction crunch has been complicated by the timing of federal assistance: After Missouri court proceedings largely shut down in March, St. Louis' circuit court began hearing eviction cases on July 7. As noted by St. Louis American, residents couldn't even apply for rental and mortgage assistance from the federal CARES Act until July 15.

During Wednesday's update, Krewson said that the city has so far received about 3,000 applications for rental and mortgage assistance — in addition to some 1,500 wrongly addressed applications from residents in St. Louis County.

Those city applicants should expect an email from the St. Louis' Health and Human Services department.

"Evictions in the city of St. Louis have now been paused.... until we see whether or not we can help anyone who's in the process of being evicted," Krewson said during the update, adding that the city wants to "bridge the gap and keep people in their housing."

The rental assistance will make a critical difference for residents, but more will be needed to confront the underlying eviction crisis, argues Lee Camp, a senior staff attorney with ArchCity Defenders.

Camp has spent weeks representing clients in city eviction cases and monitoring the hearings. Even in the best of times, these proceedings can be a harrowing and disorienting process for a tenant facing homelessness.

With hearings moved to Zoom calls, the problems have only worsened, Camp says.

"We are seeing a language barrier, disability barriers," he tells the RFT, and notes that while judges and attorneys appear on video in the hearings, tenants must call in by phone. Most of the tenants calling in have no attorney, and if they miss the hearing, the eviction case is decided, by default, in the landlord's favor.

Proceedings can stretch for hours, leaving tenants confused and at times unable to hear what is happening in their case. At one point, Camp recounts an individual who needed a translator to

"He was in his property manager’s office, and his property manager, the very person who’d moved for the eviction hearing against him, was his interpreter for the court though the video hearing," Camp says. "It was one of the saddest things that I have seen."

On Thursday, hours before Burlison's order formalized the suspension of evictions, the city's Joint Boards of Health and Hospitals convened for an emergency meeting to address an eviction crisis brewing at the a time when the city has become "saturated" with coronavirus.

"Evictions during a pandemic is tantamount to a public health crisis," argued Dr. Will Ross, the board’s chairman.

The twelve-member board voted to recommend that Burlison issue a suspension of evictions through October 1.

Instead, Burlison set the suspension to expire September 1. For dozens of families, that leaves just 27 days to find a way to avoid eviction.