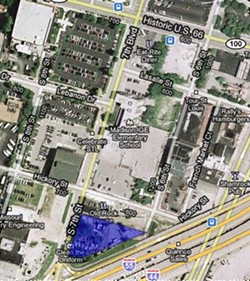 Opal's Salvage Yard lied just south of the Old Rock House at Seventh and Hickory.
Chalk one up for the little man. Or in this case the little woman.

Yesterday a St. Louis jury awarded 80-year-old Opal Henderson $1,009,000 after the city took her junkyard in 2008 through eminent domain. Henderson and her family operated the scrap heap at 7th and Hickory, just south of downtown, for over 50 years.

Anyhoo, so the city offered Henderson $200,000 for the property. She and her attorney Chet Pleban balked and the matter finally ended up in court this week with a jury proving the axiom that one man's woman's junk is indeed another one's treasure. The city must now pay Henderson more than a million bucks.

P.S. You wouldn't by chance have a line on a rear bumper for a '94 Taurus would you? Holler if ya do.