An outfit worn by Webster Groves-native Karlie Kloss in the annual Victoria's Secret Fashion Show on Wednesday has the company under fire.

Kloss strutted down the runway in a Native American-themed ensemble, featuring a feather headdress with tails down to the floor.

She looked super hot in it and to some people, also super racist. 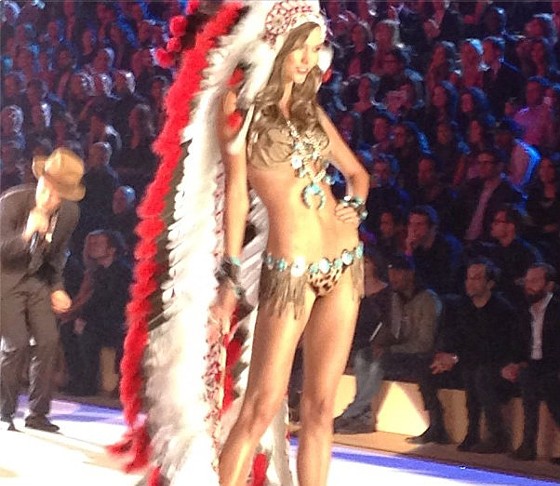 Kloss didn't seem to anticipate that her costume was controversial beforehand.

"I'm so excited, I'm very, very lucky, I have three insane outfits," she gushed to CBS News before the show.

She may not be feeling quite so fortunate now. Angry comments have started popping up on the Victoria's Secret Facebook page and lots of blogs are questioning the appropriateness of the look.

"We are a culture, not a costume. Way to go Victoria's Secret for misappropriating all Native American Indian women," one commenter wrote. "Not only are we offended and insulted, you are sexualizing Native American women and using sacred items from our culture and our traditions."

"What is it with you people (i.e. the air heads that think it is okay to play dress up as an "Indian,")? Since when did "red-face" become the new "black-face? We are not a fashion trend," writes another.

This is coming on the heels of a similar controversy involving Gwen Stefani, who wore some Native-American-ish garb in a new No Doubt video that the band has since retracted. The video had cowboys battling Indians, and tomahawks, and just a whole bunch of other really stupid stuff that they should've thought twice about.

"We sincerely apologize to the Native American community," the band said in a statement.

What do you think -- is Karlie's outfit racist or A-OK?

(There is a third option: Stupid. Like this second look of hers. We didn't realize being stuck to a dinner plate was supposed to be sexy.)

Update: Victoria's Secret issued this apology late Saturday afternoon on their Facebook page. Something similar was Tweeted as well:

We are sorry that the Native American headdress replica used in our recent fashion show has upset individuals.

We sincerely apologize as we absolutely had no intention to offend anyone.

Out of respect, we will not be including the outfit in any broadcast, marketing materials nor in any other way.

Update #2: Kloss herself had this to say.

I am deeply sorry if what I wore during the VS Show offended anyone. I support VS's decision to remove the outfit from the broadcast.