Keep On Rockering in the Free World

Send a News Tip
Sometimes a story comes along that makes you feel like everything is right with the world. And then, sometimes, at the very same time, another story comes along and makes you think that maybe we're all doomed after all.
First, John Rocker is back in the news. Apparently, he verbally assaulted a radio DJ at an Atlanta area nightclub. In typical John Rocker fashion, a variety of epithets, both racial and sexual, were tossed around, with "Jew faggot" and "motherfucking cocksucker" being the most prominently featured.
click to enlarge 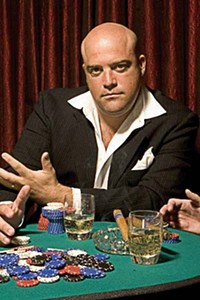 ajlmagazine.com
Shapiro. Okay, so maybe he did deserve it. Just a little.
The best part of the story, though, was when Rocker responded by phone to Deadspin's request for his side of the story. When asked if he was "eyeballing" the radio host, a man by the name of  "Steak" Shapiro (by the way, I don't trust a man who goes by "Steak;" more than John Rocker, now, but not by much), Rocker produced the first highlight of the interview:

"Well, how does somebody know I'm eyeballing them unless they're eyeballing me?" 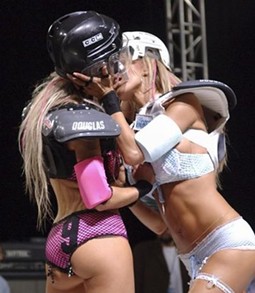 esprezzo.com
Sadly, we will all be denied such beautiful displays of sportsmanship this year.
Seems that the resort at which the Lingerie Bowl was to be held this year, a "clothing optional" resort by the name of Caliente, refused to change their policies for the Lingerie Bowl.

The organizers of the game, the Lingerie Football League, were looking to get certain areas of the resort made into "clothing required" areas. Now, I'm not exactly sure why, but that's the story. I'm assuming that the people putting on the Lingerie Bowl think  there are people out there who really, really want to see women play football in their underwear, but who find nudity offensive. Personally, I doubt there are such people in the world.
See, I'm figuring that the sort of people who want to see women play football while wearing lingerie are also the sort of people who don't mind seeing naked people, either. Of course, I could be wrong.
Or maybe the bowl people were concerned that the spectators didn't want to feel pressured to be naked themselves while watching the game. Maybe that's it. Hmm. I guess I can get behind that notion. Myself, I would be perfectly willing to sit and watch football played by scantily clad women; however, the notion of doing so naked, amongst a crowd of a couple other hundred nude people, most of whom, I'm sure, would be other men, is a little more worrisome. Perhaps the bowl people are on to something here.
Nonetheless, you have to question what kind of a sane, loving god would allow this to happen. He gives us the brilliance of John Rocker, in absolute prime condition, and then takes away our chance to watch one of the very best sporting events that most of us will ever see. I just don't get it.
I just. Don't. Get it.