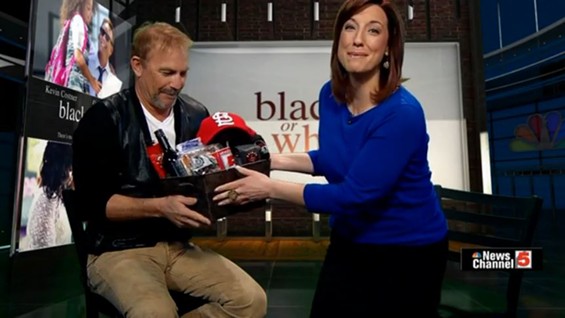 Academy Award-winning actor Kevin Costner has a smile that starts in his eyes, with corners that crinkle with delight when he talks about his love for his wife or his daughter's singing.

But there was no delighted crinkling -- only empty pools of anguish -- in Coster's eyes Tuesday morning when the movie star realized that KSDK-TV (Channel 5) had a special birthday surprised planned for him on air.

Costner turns "the big "6-0," as Show Me St. Louis' Julie Tristan puts it, on Sunday, so the TV station put together a St. Louis-themed gift basket for him, including some Kaldi's coffee, Dad's Cookie Company cookies and a KSDK mug.

Costner gave no fucks. In an immediate effort to make the whole thing stop, Costner reprised a line his four-year-old daughter told him while watching his new movie, Black or White: "Daddy, you've got a big tummy!"

"Here's something to make your tummy bigger," Tristan tells Costner laughingly while dropping the basket into his arms.

Tristan tried to tell Costner about all the St. Louis goodies in his gift basket, but instead, Costner attempted to offer a compliment that came off as more than a little backhanded.

"There is hardly a city in America that's, kind of, as proud of itself than St. Louis, in a really positive way," he says incredulously, like he's still not quite sure what the Lou has to be proud of.

Ever the morning show warrior, Tristan switches gears to explain that KSDK also gave Costner a St. Louis Cardinals ballcap. After all, Costner was a Cardinals fan as a child.

"That was when I was a kid and I was still putting Sports Illustrated stuff up on your walls," Costner tells Tristan. "That's how you know. And, uh, that was the team." 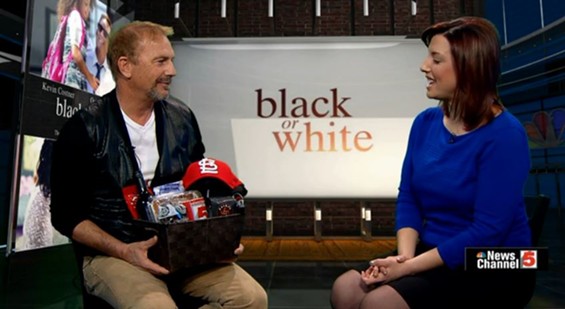 Costner's obvious repulsion to public celebration of the end of his sixth decade contrasts starkly with his gratitude to the people of St. Louis, who packed Wehrenberg's Ronnie's 20 Cine the night before for the premiere of his heart-warming family movie Black or White. (Yes, the title Black and White was already taken, so they switched it up, Costner says.)

"I was really happy the people of St. Louis came," he says. "It was clear people didn't expect it to be the way it was. It was such a warm feeling in the audience."

The clue that Costner wouldn't be psyched about his gift came in an answer he gave earlier in the KSDK interview:

"For some people, the publicity, that thing is fun for them. It's not for me."