Kevin Waida, Alleged Panty Raida, Had 200 Pairs of Panties in a Drawer 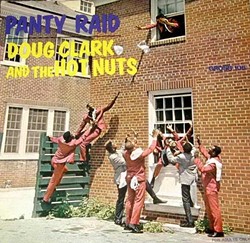 The most current panty raid image that could be found.
Mizzou's Maneater newspaper reports that an actual college panty raider has been arrested for the theft of an estimated 200 women's panties from the Hatch residence hall. The suspected culprit, Freshman Kevin Waida, 19, was turned in by his roommate after female residents of Hatch had complained that someone was stealing their underwear from the dryer. Waida was arrested on charges of stalking and stealing and has been released on a $1,500 bond.

In other words, there's no shortage of jerk-off material out there, man. Instead of creeping out your fellow residents, pursue any of the numerous options out there for your onanistic needs. Part of growing up is learning how to handle that shit out of sight, without victimizing anybody else -- particularly your neighbors in a co-ed residence hall, all of whom have Facebook pages and Twitters and a half dozen other online life-sharing sites.

It was a wise man who once said, "Keep it secret -- keep it safe." It's advice that applies to one's spanking habits as well as world-destroying rings of power. In this case, being suspected as an underwear sniffer while at college is pretty much the same thing, at least as far as dating is concerned for the foreseeable future.