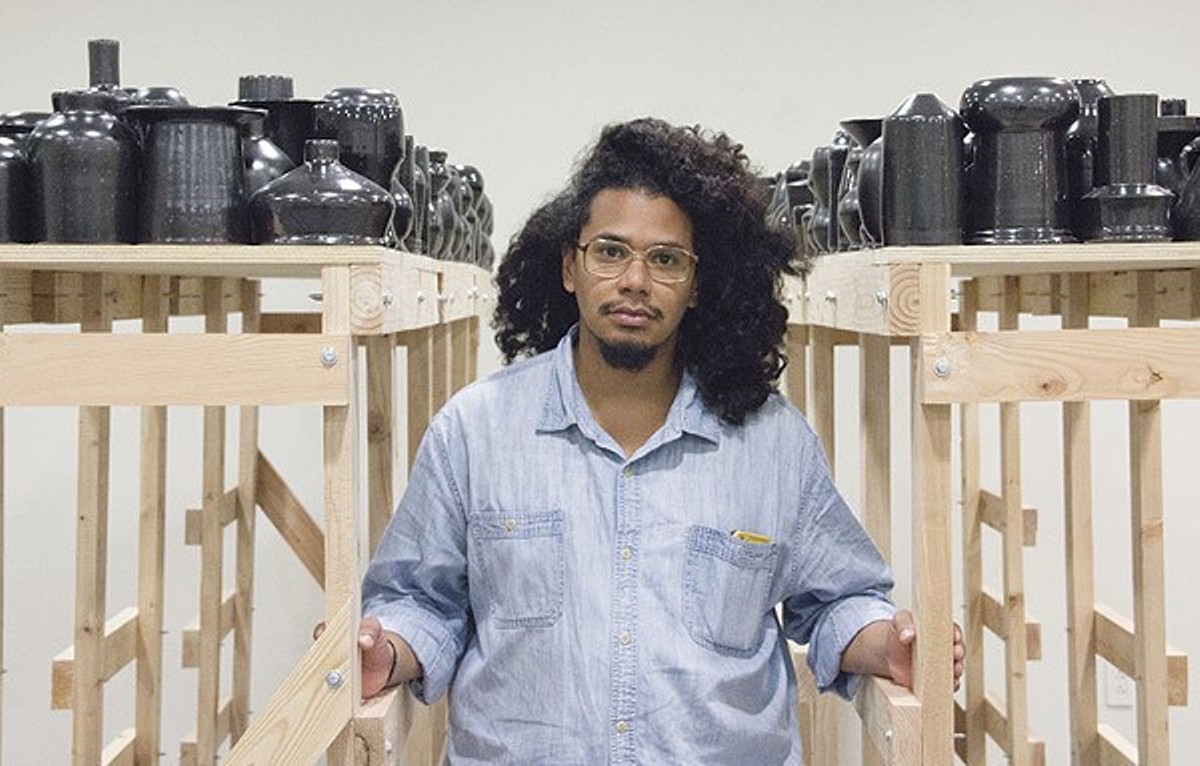 In the week of September 19, the 24-year-old sculptor and multimedia artist Kahlil Irving was supposed to be basking in the triumph of his first solo exhibition, scheduled to open the Friday before at the Bruno David Gallery.

Instead, the show was canceled through a frustrating act of God — the unexpected discovery of structural defects temporarily shuttered the building. And then a different kind of development, though no less frustrating, set Irving on a different course.

Just six days after what was supposed to be his gallery debut, he finds himself across the street at the Contemporary Art Museum of St. Louis, arguing that its current exhibition supported white supremacy and needed to be taken down.

Before a 400-strong crowd, with the audience overflowing from the balcony, Irving takes to the mic.

"They knew it was something that would get them their return. That's why this is here," he says to the packed room. Dozens of audience members nod their heads.

Around a corner is the museum's main gallery. There, hanging from one of the towering walls, a floor-to-ceiling photo of a black woman in a bikini makes bedroom eyes over her shoulder. She's been streaked with toothpaste. On the opposite wall, the image of a black protester being mauled by a police dog is obscured behind circular blotches of chocolate.

"Someone wanted a return." Irving continues. "But they're not going to get it this time. Because it's got to go."

Criticizing the museum isn't something Irving does lightly.

Irving first walked into the Contemporary Art Museum of St. Louis as a teenager. It's just a ten-minute walk from Metro Academic and Classical High School, the public school from which he graduated. CAM exposed the precocious Irving to that critical sense of newness that he now seeks in his own art — the cutting edge, the never-before-seen. The kind of creativity that plays in the unexplored boundary between what is and what could be.

But Irving takes art seriously. It's not enough for artists to provoke, he says. They must also remember that their work, no matter how abstract, draws its existence from the world around them.

Now CAM's racially charged museum exhibit has yanked Irving and others into the middle of a controversy they never asked for, one that's left St. Louis grappling with the intersection of art's ephemeral ideals and the inescapable history of black oppression in America.

In Kahlil Irving's studio, art begins as earth. He slams a block of clay onto a potter's wheel, working the speed with a foot pedal. The machine's telltale whir fills the network of cubicles and classrooms that stretch through the first floor of Walker Hall on the main campus of Washington University.

It is late afternoon on a weekday in mid-August. Irving, a graduate fellow in the Sam Fox School of Art and Design, is still getting re-acclimated to life in his hometown, having recently returned from a two-month printmaking residency in Venice, Italy. In a matter of days, hordes of college students will fill the air with the bustle of creative industry. Now, though, the hallways and rooms are dead silent, save for the sound of Irving's wheel. He kneads his palms into the sides of the spinning lump, pressing it into an even wedge between his hands.

Irving presses a divot into the undulating clay, and then a cylinder, slicked with water, rises and falls at his whim. He jabs his right index finger about halfway up, forcing the clay to stretch and become the slender, tapered neck of a vase. Using a flat metal tool called a rib, Irving rubs away the drag marks left by his fingers.

Irving holds up the result, a smoothed clay pot shaped somewhat like a squat wine bottle. All it needs now is some time in a hot kiln.

"Yeah. That's one," he says, placing the piece on a shelf. He's done this thousands of times since taking his first pottery classes as a preteen at a local arts nonprofit in Tower Grove Park. Beginning to end, the clay became a pot in about five minutes. He makes it look easy.

"Twelve years, man," he says, laughing. "Twelve years. Out of all the things I can do in my life, I can make a good pot."

Irving was born in San Diego, but in childhood bounced between the custody of his father in St. Louis and his mother, who spent time in Nebraska, Arizona and Colorado. He settled in St. Louis permanently at eleven, and soon after his father took him to the Potter's Workshop, a nonprofit operated by local artist and musician Jenna Bauer.

Even then, she could sense he was something special.

"He had determination, willingness to get on his bike and ride to classes several times a week. He recognized an opportunity and did not let it pass him by," she says.

As Irving entered high school, he transferred that doggedness to building a portfolio, and spent much of his time improving his skills under the instruction of teachers at Craft Alliance. Dan Barnett, the studios manager there, remembers young Kahlil shadowing him at every opportunity. "He was tenacious; he wanted to learn everything."

His work paid off. Irving was one of just four applicants awarded full scholarships to the Kansas City Art Institute in 2010.

In 2012, as an undergrad, Irving attended a benefit auction at Craft Alliance. He'd donated a piece he'd made in Kansas City, a ceramic frame with gold bars protruding from the bottom. Also in attendance that evening was a Washington University ceramics professor, Buzz Spector.

"I met him moments after I bought the piece," says Spector. "Often, when you tell a young artist that you like their work, they have to take it on faith. But I had just forked over cash, so he knew I was sincere."

Irving's work in Kansas City didn't go unnoticed. He applied for and won a flurry of grants, fellowships and international residencies. After graduating, he applied to several top master's programs. He settled on an institutional fellowship (tuition included) as a Chancellor's Graduate Fellow at Washington University.

Spector is now Irving's advisor. It's not just Irving's technical proficiency that stands out, he observes, but the rare thoughtfulness in which Irving places a piece of art in relation to the surrounding environment.