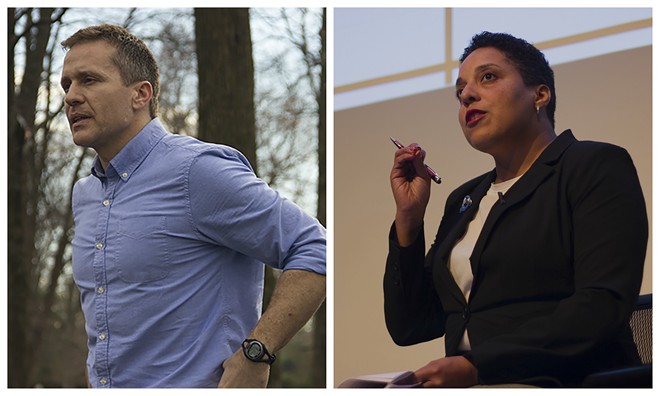 The decision to prosecute Missouri Governor Eric Greitens will likely go down as the defining moment of Kim Gardner's career, and certainly the most dramatic. That decision, which involved a felony complaint sworn by her office in February 2018, has now thrust the St. Louis Circuit Attorney into a crisis that seems poised to become a perilous fight for her political future.

In Gardner's telling, she's the victim. In a statement sent to the media last night, Gardner claimed that Greitens' legal team threatened her and her staff on multiple occasions in 2018. She says she even filed a complaint with the St. Louis police accusing the attorneys of tampering with a judicial officer.

On April 18, 2018, for instance, "I was informed that threats were made to my subordinates with the request to inform me what was going to happen if I did not dismiss the current pending Greitens case," Gardner wrote, adding that although she notified the court of the threats, "No action was taken at that time."

Gardner's press release doesn't explain who made the threats — or what, precisely, they said. That lack of detail shouldn't be surprising: The prosecutor is under a court's gag order. It means Gardner can't comment directly on the Greitens investigation or, for that matter, on the accusations detailed in an indictment unsealed Monday. That indictment charges an investigator she hired, former FBI agent William Tisaby, with evidence tampering and six counts of perjury.

Parsing both the indictment and Gardner's carefully worded Tuesday statement offers perhaps the clearest picture to date of the implosion of the Greitens investigation. The story it tells leaves much for Gardner to answer for. 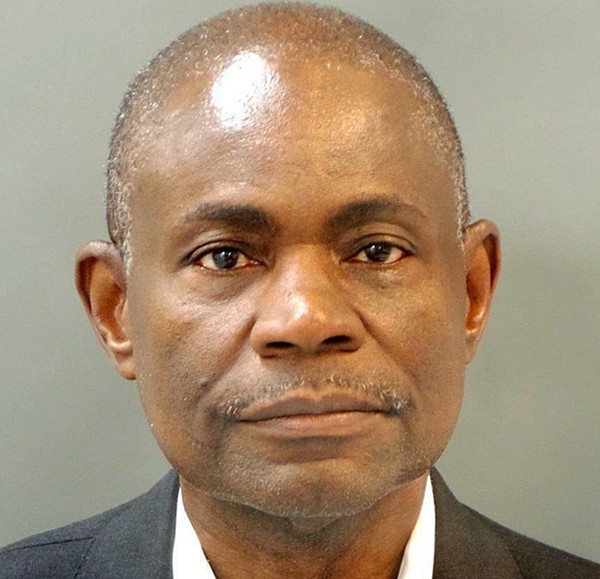 SLMPD
William Tisaby, who was indicted for perjury, maintains his innocence.

That story starts in January 2018, when Greitens attempted to preempt a KMOV bombshell story by issuing a statement confessing to an affair with his hairdresser.

But the allegations in KMOV's story presented a scenario that went far beyond an extra-marital fling: The governor had restrained her, the woman claimed in a recording made by her estranged husband, and then photographed her in a nearly nude state to blackmail her into silence. Immediately, Gardner announced her office would look into possible criminal charges.

As the indictment notes, however, "contrary to normal protocol," Gardner did not turn to her office's own investigators. Instead, she reached out to Tisaby. And soon after, the indictment alleges, things started to unravel.

In February, Gardner's office charged the governor with a felony charge of invasion of privacy. He soon hired a high-powered legal team. And as they built their defense, they complained that the prosecutor's office refused to provide documents related to Tisaby's work on the case. They wanted his handwritten notes, his documents and research materials.

On March 16, 2018, Gardner alleges that threats were first made to her staff during "a meeting in which Greitens' defense team was present." Three days later, with Gardner in the room, Greitens' attorneys deposed Tisaby.

Under oath, the former FBI agent stated that he took no notes during an interview with the hairdresser, identified in the court documents as "K.S." Under further questioning, Tisaby claimed he "did not ask K.S. any substantive questions" during the interview.

Video of Tisaby's interview with K.S. — video that Gardner initially claimed did not exist — showed the investigator taking notes and asking "over 150 questions." Additional documents showed Tisaby had used research material provided by Gardner as a template for his own notes, even though Tisaby had testified that he'd received no information or research help from the Circuit Attorney's Office as he prepared for the interview.

In the indictment, Tisaby's alleged perjuries spiral through Gardner: She personally questioned Tisaby, yet did not object to statements she almost surely had to know were false:

Gardner, the indictment specifies, had been present during the video-recorded interview with K.S., and the video shows Tisaby taking notes. The indictment's implication is clear: Gardner had to know Tisaby was lying.

There was more. During Tisaby's deposition, he took a break. Questioned upon his return, he testified that he had not contacted Gardner or the Circuit Attorney's Office. But phone records showed he'd actually shared seven phone calls with the prosecutor.

In addition, Tisaby insisted that Gardner never asked him to seek out technical experts to retrieve the photo which Greitens had allegedly taken to blackmail K.S. In reality, weeks prior, Tisaby had in fact contacted a digital forensic investigative company and participated in multiple calls with the company, and Gardner, to discuss the difficulties in obtaining the photo, the indictment charges.

Here, too, the indictment includes an excerpt from Gardner's questioning of Tisaby during the deposition. She asks Tisaby, "Were you supposed to do any follow up on a photo?"

According to the transcript, Tisaby replies, "No, I was not."

The indictment presses further on Gardner's role in enabling the perjury. It cites her chief trial assistant Robert Dierker, who told the court that he'd actually planned to report Tisaby to the police for perjury.

"He did not do so," the indictment notes, "explaining that Gardner had directed him not to report the allegation to the police."

The indictment stops short of accusing Gardner herself of the crimes which Tisaby is now charged with. But Tisaby's attorney, Jermaine Wooten, asserted Tuesday that his client is innocent — and that he was being used to get the woman who hired him.

"Ms. Gardner is probably the actual target here, not Mr. Tisaby," Wooten told Fox2 on Tuesday, though he too stopped short of launching any more accusations. He also suggested he would not turn state's witness.

"Mr. Tisaby has done nothing wrong," Wooten added, "and he’s not alleging that Ms. Gardner has done anything wrong."

However, is difficult to imagine an explanation that would exonerate Tisaby in light of the indictment, which is based on videos and notes obtained by special prosecutor Gerard Carmody. And Gardner is, at the very least, presented as an ethically compromised prosecutor who tried to shield her investigator and witness from Greitens' defense attorneys.

Ultimately, Tisaby's actions led to the collapse of Gardner's case against Greitens. When Tisaby refused to testify on the perjury complaint, a city judge approved the defense request to put Gardner herself on the stand. Rather than become a witness (which is not unprecedented for a prosecutor), Gardner announced that she would drop the charges and seek a special prosecutor to give the case another look. In June 2018, that special prosecutor, Jackson County Prosecuting Attorney Jean Peters Baker, announced that her office would not refile the felony charge against Greitens.

By then, Greitens had already resigned. In return, he'd made a deal with Gardner's office to dismiss a separate felony charge for computer tampering. Greitens is currently attempting a comeback in the U.S. Navy.

But the basic question posed by the indictment remains: Why would Tisaby, with the aid of Gardner, lie to Greitens' attorneys under oath? Why risk the entire case when documents and video evidence existed to contradict them?

Gardner's statement released Tuesday does not address this issue, though she seems to be suggesting that threats from Greitens' attorneys deserve equal attention to the allegations against her office. (Gardner's statement also complains that the city police department dragged its feet investigating her complaint about the threats. She is now asking for a special prosecutor to take up that investigation.)

Somewhat easier to address is the question of what information Tisaby and Gardner were trying to protect in all this. For instance: Two pages of Tisaby's notes from his interview of K.S. were never provided to Greitens' legal team, and the indictment claims they were only uncovered after a police raid on the Circuit Attorney's Office.

Those two pages feature statements from K.S. to Tisaby, including a statement that she was scared of both "[Eric Greitens] and her ex-husband" [emphasis added].

Another statement, which might have made Greitens' defense team ecstatic, includes K.S. telling Greitens that she wouldn't have sex with him, and that Greitens "did not push."

The indictment states that the material Tisaby did provide to Greitens' defense team "excluded a large amount of info that was provided to him by K.S. regarding the actions of her husband, all of which were important to the defense case." After all, K.S.'s "obsessed" ex-husband surreptitiously recorded her confessing to the incident with Greitens — and it was the ex who passed it to KMOV and other media outlets.

Would knowing K.S.'s feelings about him have changed things? Maybe. After all, it would only be revealed months later that a politically connected newspaper publisher had couriered $50,000 in cash to the attorney representing K.S.'s ex-husband. Was the ex-husband pushing the story of his wife's interactions because he was bitter? Or was he being encouraged by people who wanted to take down Greitens for other reasons? Greitens' attorneys hoped to get to the bottom of that question, and Tisaby's evasions may have complicated their quest.

But even though Greitens has now retreated to private life, his lawyers may be the ones having the last laugh. Gerard Carmody, the special prosecutor who supervised the investigation into Tisaby, is the former law partner of Greitens' attorney Ed Dowd. And whatever threats Greitens' team allegedly made to Gardner, it couldn't have been worse than the outcome she faces today: Her investigator facing years in prison and her own credibility in question.

The indictment and its explosive charges leave St. Louis caught between two versions of Gardner. One is a prosecutor who took office on the promise of reform, and bravely pursued the case against Greitens in defiance of the powers that be.

The other is the prosecutor described in the indictment.