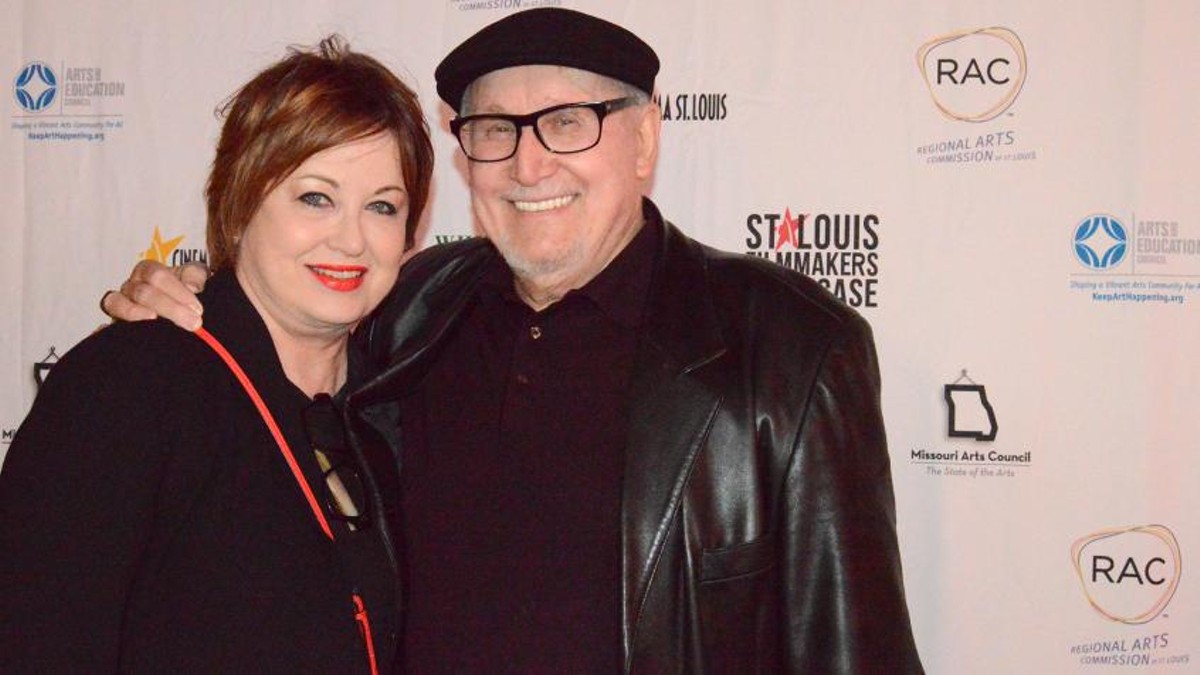 Kim Tucci, right, was a booster of the city's film industry -- and so much more. COURTESY OF CINEMA ST. LOUIS

We lost a true St. Louis original with the passing of J. Kim Tucci on Monday.

Tucci is being eulogized as a civic leader, and he was, but that doesn't really do justice to his legacy. Tucci was way more than that. He was an icon, the kind of guy you think of when it's said, "God broke the mold after He made him."

Tucci was indeed one of a kind. He lived his 78 years with force and compassion and humor and anger and kindness and temper and loyalty and a fair share of feuds. But mostly loyalty. Kim Tucci was defined by his devotion to his family and friends, to the civic organizations and charities to which he gave so much of life and, not least, to St. Louis.

No one ever cared more about St. Louis than Kim Tucci. No one.

Tucci co-founded the Pasta House restaurant chain in 1974 and built it — along with Joseph Fresta and the late John Ferrara — to a local institution grossing $53.7 million annually, with 1,000 employees in its nineteen local restaurants and catering operations, according to the St. Louis Business Journal. But Tucci is less distinguished for the revenues he took in than the ones he gave away.

When it came to good causes, Tucci was everywhere. There were the official Pasta House charitable efforts he founded — a Caring and Sharing Program raising food and money for the less fortunate and a "Reading wRiting and Ravioli" program that has rewarded more than 600,000 students and teachers with free food.

But the Hawk — as his friends knew him — went far beyond corporate philanthropy. Along with his wife Sharon, Tucci was nothing short of ubiquitous in civic and charitable circles. Tucci threw himself into an endless array of good causes as an auctioneer, emcee, fundraiser, board member or simply supporter.

And that's not counting his role as a power broker in local and state Democratic politics. As a mover and shaker, Tucci was in perpetual motion, sometimes in and out of support for the same candidates or office-holders.

Tucci was always a man on a mission, and there were times when the mission changed. Publicly, there were a number of instances when Tucci morphed from key supporter to furious adversary of a prominent leader — Mayor Vince Schoemehl, Father Lawrence Biondi and Governor Jay Nixon spring to mind — but whatever the details, there was one common thread: Kim Tucci stood his ground for what he believed in. Friend or foe, if you crossed him, you'd have a battle on your hands. Tucci was all about passion and principle.

As an example, when Tucci felt that Nixon had pulled the rug out from under the city by cancelling a state program giving tax credits to filmmakers and thus tourist dollars to St. Louis, so dear to his heart, he didn't let past support soften his response:

"It's a joke what Nixon's done. We're not going to have anything now for bringing in films," Tucci told me for a St. Louis Magazine column. "He thinks he knows everything ... well where does he think the cities are? Aren't we part of the state of Missouri?"

I'm biased because I agreed with Tucci more often than not on most issues, but the real charm of his public persona was how unvarnished it was. He cut to the chase. He didn't mince words. And Tucci did another uncommon — and essential — thing: He crossed the city's racial divide as gracefully as any other white leader I can think of. He was an equal-opportunity practitioner of spirited politics.

He made friends along the way, and close ones at that. The outpouring of tributes Monday showed the depth of their feelings. From Claire McCaskill: "His place in my life can be filled by no other. I'm heartbroken." Representative William Lacy Clay (D-St. Louis) said, "He was more than just a great civic leader, he was my dear friend." Clayco CEO Bob Clark, one of the area's best success stories, termed him "my mentor and role model."

Tucci didn't just support people, from the famous to the unknown. He touched them.

Privately, I found Tucci delightful. I was not among his close circle of friends, but whether at his restaurant or one of the countless events at which I'd see him, he invariably was warm and smiling. He had a big sense of humor.

There was one time I played golf with him, courtesy of Mark Vittert, one of Tucci's closest friends. I was a beginner and abjectly horrible. Tucci wasn't in danger of making the PGA tour, but he was plenty better than me, and after a particularly awful hole, he sidled up to me and whispered, "You might want to stick to writing." The line wasn't all that special, but the gleam in his eye and the smile were. It made for a fine day of bad golf.

Tucci's official civic legacy will be dutifully recorded by the array of boards on which he was serving at the time of his death. Among many, many others, he was vice chairman of Explore St. Louis (formerly the CVC), board chairman of Cinema St. Louis and marketing vice president of the Loop Trolley Co. And what's most remarkable is that Tucci had continued to serve — and as an active, key participant, not just a name — on many of them even while running a large company and enduring a battle with cancer that lasted several years. An untold part of Tucci's story is the courage and toughness he showed — without an ounce of self-pity — while tirelessly battling personal adversity.

Fittingly, the first significant story about Kim Tucci to appear in the local media marveled at that very trait: boundless energy. On January 5, 1967, the Post-Dispatch sports pages offered high praise for a young Tucci's success as soccer coach at DeAndreis High School in the city.

"Tucci is a dapper bachelor who at times seems to be in many places at once," the Post reported. "In the day, he teaches speech at DeAndreis. In the afternoon he coaches the Wildcats soccer team and at night he helps manage Tony's Steak House. Although he works about 90 hours a week, Tucci always shows up on time for practice at 6:45 a.m."

The Tony's reference was also fitting, since Tucci got his start as a cashier and then assistant manager with the most famous St. Louis restaurant family of all time. His personal goals at the time, he told the paper, were "to get my master's degree in speech, coach college soccer and become the manager at Tony's."

Of those three, I believe Tucci only earned the master's degree. But becoming himself a St. Louis treasure pretty much sufficed. As Kitty Ratcliffe, president of Explore St. Louis, put it simply in eulogizing Tucci:

"He was our champion."

Ray Hartmann founded the Riverfront Times in 1977 and recently returned to these pages as a columnist. Contact him at [email protected] or follow him on Twitter at @rayhartmann.

Editor's note: The print version of this column misquoted the 1967 Post-Dispatch story about Tucci. He arrived at practice at 6:45 a.m., not 7:45 a.m. We regret the error.