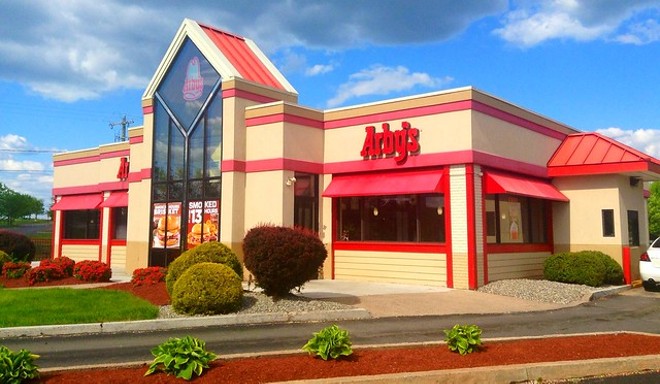 Flickr/ JeepersMedia
Poyner wanted the meats and was willing to pay for them in roast beef gift cards.

Barry Poyner may have taken Arby's slogans, "We have the meats" and "I'm thinking Arby's" a little too seriously.

A professor of communication at Truman State University and elder at the Kirksville Church of Christ, Poyner now faces a misdemeanor prostitution charge for attempting to solicit sexual favors from male college students on Grindr, as first reported by the Kirksville Daily Express.

Poyner, age 57, has been charged with a class B misdemeanor count of patronizing prostitution. If convicted, he could spend up to six months in prison and/or be required to pay a fine of $1,000, according to court documents.

The Truman State University Police Department was alerted to Poyner's solicitation of male college students after receiving a tip that the professor was “harassing male Truman students for sexual contact as well as offering to pay for items for sexual favors by using the app Grindr,” documents state.

The tip was shared with the Kirksville Police Department, which created a fake Grindr profile. Under the username "DILF," Poyner messaged the undercover police profile, stating that he “would love to have a sugar daddy relationship.”

So how does Arby's factor into this sordid story? Welp, Poyner wanted the meats and was willing to pay for them in roast beef gift cards.

"'DILF' eventually agreed to meet the undercover officer at a local gas station to provide the fuel before the sexual favors," the Kirksville Daily Express writes. “'DILF' provided his location, which matched Poyner’s address, and Poyner then arrived at the gas station. He attempted to flee the scene when officers approached his vehicle, but pulled over several blocks later."

Poyner believed he was meeting with an adult male, but, according to court documents, didn't seem to realize that the promise of gas money or gift cards in exchange for sex constituted as prostitution.

Truman State University is cooperating with law enforcement on the case and has placed Poyner on suspension, per a statement released on Friday.

“He has been placed on suspension and informed that he is not allowed on campus, cannot have contact with any student organizations or participate in any campus events or activities," reads the university's statement.