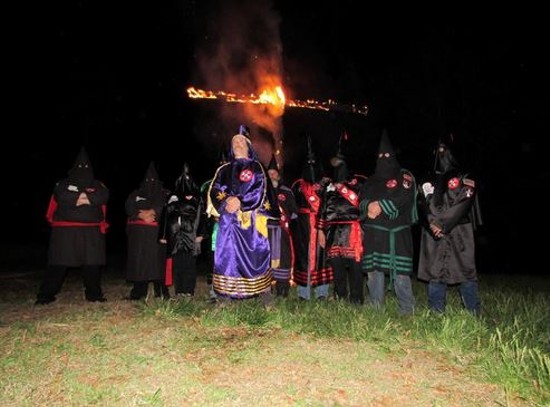 You'd think the Ku Klux Klan would be on the same page when it comes to Darren Wilson, the white Ferguson cop who shot and killed an eighteen-year-old black teenager named Michael Brown on August 9.

Yet, it seems even cross-burning, hood-wearing white supremacists disagree on officially supporting Wilson.

One one side there's Charles Murray, the national head of the South Carolina-based New Knights Empire of the Ku Klux Klan. He tells Daily RFT the group's Missouri chapter is throwing a fundraiser tomorrow for Wilson in Sullivan, a town about an hour's drive southwest of Ferguson. On the other side of the debate is Missouri's own media-friendly Klansman Frank Ancona, head of the Traditionalist American Knights of the Ku Klux Klan.

See all Riverfront Times coverage of Michael Brown and Ferguson.

According to Murray, the fundraiser will be held on private property and open to local members of the New Empire Knights and two other Klan groups. Murray claims to have already raised "close to $2,500."

Murray announced plans for the fundraiser on the group's blog last week, and it only became a news item after the Southern Poverty Law Center posted the details on its blog a few days later.

"He is a hero!" reads the original post announcing the Wilson fundraiser. "We need more white cops who are anti-Zog and willing to put Jewish controlled black thugs in their place."

Since then, Murray has posted pictures that allegedly show armed Klan members within Ferguson. On Tuesday, Murray added photos of a man holding an assault rifle standing beneath a ceiling fan. According to the caption, the man was standing guard inside "a white single mother's home, located near the riots."

via
A photo of an alleged Klan member in Ferguson on August 19.

However, the planned fundraiser angers the Traditionalist American Knights' Ancona, who feels the KKK shouldn't be inserting itself into such a volatile situation -- and especially while the grand jury investigation is still under way.

"Personally, I think we need to wait until we see all the facts, all the evidence that's being gathered. Right now we're hearing a lot of hearsay from both sides on how this went down," he says, though he adds that his opinions of the case "tend to come down on the side of the law-enforcement officer."

On Monday, Sullivan mayor Thomas Leasor sent out a press release declaring that neither he nor city officials were aware of a planned KKK fundraiser.

Indeed, Murray's Wordpress profile pic appears to have been lifted from a 2008 news story about a missing man in Australia. Then again, it's hard to take Ancona's criticism too seriously, as the KKK outfit is explicitly designed to hide the wearer's identity.

Flickr/Martin
The full hoods do have some tactical downsides, however.

Murray and Ancona were already feuding before the Michael Brown's shooting. Murray has written several blog posts "proving" Ancona's Jewish ancestry, while Ancona has taken to KKK forums and Twitter to discredit Murray's group, calling it "a complete scam and fraud."

According to the New Empire Knights website, Murray has been involved in the Klan since 1983. He writes that he founded the group last year after he "became sick of the modern Klan groups which exist today."

As for Ancona, he's not ruling out sending support to Wilson at a later date. In fact, he says, several members of the Traditionalist American Knights have been stationed "near the area" of Ferguson in the past week.

"The Klan has no interest in this," Ancona says, referring to Murray's fundraiser. "I don't want to try to gain or exploit his situation. Charles Murray is just out there to make a name for himself. I don't know what his goal really is."

It's worth noting that Ancona's seemingly moderate stance on Ferguson (for a racist, that is) is seriously undercut by his Twitter postings. Here's a relatively tame one:

Ferguson style chimp out coming to a town near you ? #Ferguson http://t.co/EMg6VclNmn