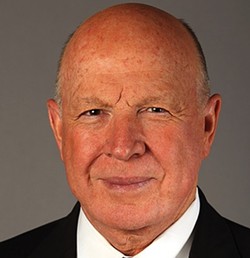 Yesterday, KMOV-TV (Channel 4)'s Larry Conners made quite a splash when he speculated on his Facebook page whether the Internal Revenue Service may have targeted him in response to his interview with Barack Obama last year. Our original coverage is below. Since his post got national attention, Conners went on air to address the controversy -- and offer a pretty surprising disclosure.

His issues with the IRS, he announced, "preceded that interview by several years."

And, he emphasized, his views are his own, not that of his company.

Watch his full statement below.

Conners was already getting quite a lot of attention for his remarks -- in the wake of growing controversy around the IRS's targeting of conservative groups -- but his disclosure yesterday changes the story quite a bit.

First off, the central premise of his Facebook post was that he did a tough interview with the president last year -- one which, he claimed, the White House didn't seem to like. And after that, the IRS "started hammering" him. The fact that he actually had issues with the IRS for several years prior certainly is, at the very least, relevant to note.

The disclosure earned him some mocking on Twitter yesterday.

Larry Conners admits his problems with IRS preceded his Obama interview by "several years." This is beyond absurd. bit.ly/18Jw67u

Conners also admitted that he may have "unintentionally" crossed a line as a journalist, when he interjected a personal matter into a national news story, which some said is an important question to address:

h/t to KMOV bosses for walking back a veteran anchor's interjection of himself into the news. RT kmov.com/video/featured...

Conners does still have support from conservative radio host Dana Loesch, who was very vocal about the issue yesterday and argued that it was still a legitimate story because the IRS targeting did intensify after the Obama interview. She also alleged that, according to her knowledgeable source, Conners didn't write his own statement and was forced to read it.

We've left a message with KMOV yesterday and have not heard back. We'll update if we do.

At the same time, Conners' parent company came down pretty hard yesterday, saying his Facebook and Twitter posts were inappropriate and that the company does not condone "personal posts that jeopardize the journalistic nature of our business."

Continue for our original coverage and for the full Facebook message.