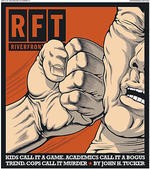 Earlier this year, an elderly man was killed when a teenager playing the game attacked him and his wife in a south city alley. The latest reported incident of Knockout King in the St. Louis area came far away from the inner city. It happened in the leafy suburb of Richmond Heights.

Matthew McLeod, a 22-year-old hair stylist at the Galleria shopping mall, says he was attacked last week on his way to work by a group of five teenagers. The incident occurred right after he got off the MetroLink platform in Richmond Heights. McLeod says police told him the suspects confessed they were playing the "Knockout Game." McLeod also believes he was attacked because he's gay.

Below is McLeod's story as told to KSDK...