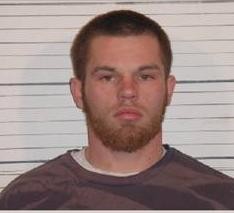 St. Clair County Sheriff's Dept.
Kraig Monroe
A two-year-old girl is in St. Louis Cardinal Glennon hospital recovering from a surgery that removed 18-feet of her intestines following a severe beating allegedly delivered by the hands of her mother's boyfriend.

Doctors say the toddler, Amanda Runyon, also suffered a broken arm and bruising about her body. She may have to eat the rest of her life through a feeding tube.

Yesterday the St. Clair County Sheriff's Department arrested 24-year-old Kraig Monroe in his trailer outside Belleville, charging him with aggravated battery of a child. He's being held on $500,000 bond.


The Globe-Democrat reports that the girls mother came home Sunday night and gave the child Motrin. The next day she was vomiting and in and out of consciousness. The child was taken Belleville Memorial Hospital and then transferred to Cardinal Glennon where doctors there contacted law enforcement.

This afternoon the St. Clair Police report that they have condemned the trailer in which Monroe for living and charged the 78-year-old landlord and owner of the trailer for failing to get an occupancy permit. Authorities also removed a pit bull that Monroe kept on the premises. (Pit bull, trailer, and child-beating? A true low-life trifecta!)

Eddie Runyon with his daughter, Amanda.
In the meantime, Amanda's biological father -- Eddie Runyon -- has returned from his job in the coal mines of Kentucky to stay by his daughter's hospital bed.

"I'm her father...it's my job to protect her, and I couldn't. It hurt me bad," Runyon told reporters this morning at the hospital.

"Two-year-olds should be watching Sesame Street. They should be playing with baby dolls, playing house, coloring.  They shouldn't be laying in bed hooked to fourteen different machines," said Runyon.