Krokodil, the Cheap Heroin That Will Rot Your Skin and Fingers Off, Seen in St. Louis 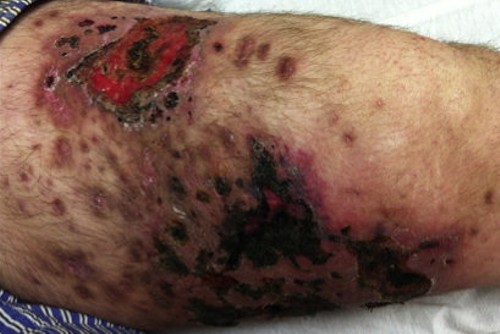 America Journal of Medicine
This is what Krokodil use looks like.

The heroin substitute is cheap and easy to make, which could draw addicts despite the guarantee that the deadly, flesh-eating drug kills users within a few years, wrote two St. Louis doctors in a recently corrected article in the American Journal of Medicine.

"[Krokodil] can turn an addict's skin dark, scaly and necrotic and cause it to wither away," say Dany Thekkemuriyi and Unnikrishnan Pillai, doctors at St. Mary's in Clayton. "Because of 'Krokodil's' ease of manufacture, low cost and potency, there is a good chance that it could become popular in the U.S."

Gene Page/AMC
This is what we think Krokodil looks like.

The two St. Louis doctors first saw the drug in a 30-year-old patient who'd started using Krokodil when his $300-a-day heroin addiction became too expensive. Within seven months, his body started to look like something from the Walking Dead: Blisters on his legs turned black, swelled painfully and started rotting away, and his left little finger turned black and fell off.

The name "krokodil" comes from the Russian word for crocodile, since long-term abusers' skin turns scaled and rugged after severe damage to blood vessels and tissues, according to the DEA.

See also: How to Make Meth The Shake and Bake Way

The drug is as easy to make as it is to die from. The root agent is despmorphine, a synthetic derivative of the addictive painkiller morphine. Combine that with paint thinner, gasoline, hydrochloric acid, iodine and red phosphorous (taken from the striking surface of matchboxes) to get a high that makes you look like a zombie.

Not only is Krokodil cheaper to get than heroin, it's faster and more addictive, too. It causes so much damage to blood vessels, muscles, bones and organs that most people die after two years of regular use.

Thekkemuriyi and Pillai's patient -- who left the hospital against medical advice after finding relief from his pain -- is the only Krokodil patient Daily RFT has heard of in St. Louis. No other major hospitals are reporting patients with skin and limbs rotted off by the flesh-eating drug.

A handful of patients have sought medical attention because of the drug, including patients in Phoenix, Houston and Joliet, Illinois, according to the St. Louis Post-Dispatch, although the Drug Enforcement Administration hasn't confirmed any cases since 2004.