During an investigation into safety in public schools, KSDK-TV (Channel 5) caused a 40-minute lockdown at Kirkwood High School, sending parents into a panic and prompting one teacher to give a student a pair of scissors to use as a weapon.

KSDK designed the special report to expose flaws in security by sending reporters with hidden cameras into local public schools to test how far they could go before being stopped by security. But the station's pathetic lack of an exit strategy left school officials frightened that their students were in danger for 100 minutes, including a 40-minute lockdown.

Only one school let the reporter walk past unlocked doors, the cafeteria, classrooms and teachers before reaching the office: Kirkwood High School. After leaving his name and a KSDK work cell-phone number, the reporter (who remains anonymous) pretended he had to go to the bathroom, asked for directions and left to accept praise from his producers for scoring a major scoop.

What KSDK's reporter didn't know was that the secretary noticed he turned left toward the front door instead of toward the bathroom. Suspicious, she called the school resource officer for backup.

And that's when things got out of hand.

For the next hour, Kirkwood school officials tried to prevent a lockdown by asking the station one simple yes-or-no question: Was the man in the office a reporter on assignment? But KSDK refused to answer. Update: KSDK says it did not return Kirkwood school's phone call until ten minutes into the lockdown, according to Poynter. 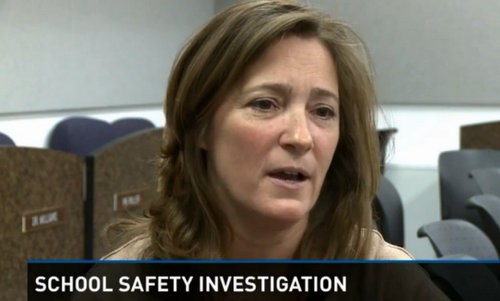 First, Kirkwood officials called the number left by the reporter, but he never answered. The outgoing message identified him as a KSDK reporter, so the school resource officer brought in Ginger Cayce, the school's communications director, to demand answers from the station.

Cayce says she called KSDK over and over to halt panic by confirming the news team's stunt.

"I told them, 'I'm going to have to go into lockdown if you can't confirm that this was a test,'" Cayce tells the St. Louis Post-Dispatch. "When we couldn't confirm or deny it, we had no choice."

The school went on lockdown.

Continue reading for heart-breaking stories of teachers and students preparing for the worst -- all for a KSDK news stunt.