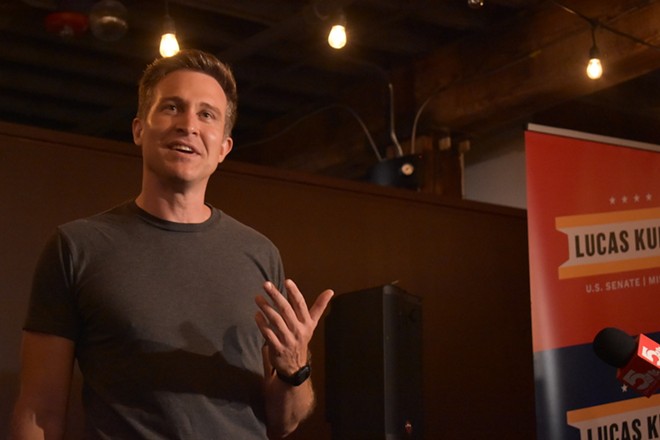 The official numbers won't be released until later this week, but an advisor to Lucas Kunce's campaign for U.S. Senate says that they've seen record-breaking fundraising since Friday, when the former Marine announced he'd seek to unseat incumbent Josh Hawley.

"This time going in, we're not starting from scratch," Kunce tells the RFT. "I'm not a nobody who's got no money and no connections anymore. We've figured out how to build out that grassroots system. We have it in place. We're doing very well already."

Senior advisor to the campaign Connor Lounsbury said that when the numbers are released later this week, they'll break both first-day and first-week fundraising records in the state.

The campaign kicked off Friday, which was the two-year anniversary of the Capitol insurrection, an event closely associated with incumbent Senator Josh Hawley who will be Kunce's opponent if Kunce wins the Democratic nomination.

University of Missouri-St. Louis political science professor Anita Manion said that Kunce is one of the stronger candidates Missouri Democrats have on their bench.

Manion says that Kunce's chances may not be helped by the fact that both he and Hawley occupy the populist wings of their parties.

"Some of the differences will come down to those culture war issues," she says. "And people just voting Team Red versus Team Blue."

Kunce says that Hawley is a "slippery, phony fraud" and that case in point is his incitement of the January 6 insurrection.

"When he thought it was going to get him power, he's out there raising his fist, rah rah-ing a crowd, inciting them to do their thing. And then the second stuff got real, you know, he skittered for that exit as fast as he can, because he doesn't actually stand for anything," Kunce says.

In a half hour interview with the RFT, Kunce talked about issues foreign and domestic, though in both cases Kunce always found his way back to his opponent.

On regulating big tech, a topic Hawley wrote a book about, Kunce calls the incumbent a hypocrite. "He sometimes says things about big tech and antitrust. Yet he votes for every single corporate-hack judge that comes before him who then makes terrible decisions and takes away power from everyday people and empowers major corporations," Kunce says.

"He says we shouldn't support Ukraine because that's a foreign war. But all he wants to do is get into war with China, like 24/7," Kunce says.

In Kunce's previous failed bid for the Democratic nomination for U.S. Senate he earned a reputation as a vigorous campaigner who showed up in all corners of the state.

He says he intends to do the same thing this time around.

"Over the next several months, we're going to be everywhere again," he says. "That's that's the thing for me. It's meeting as many people as I can."