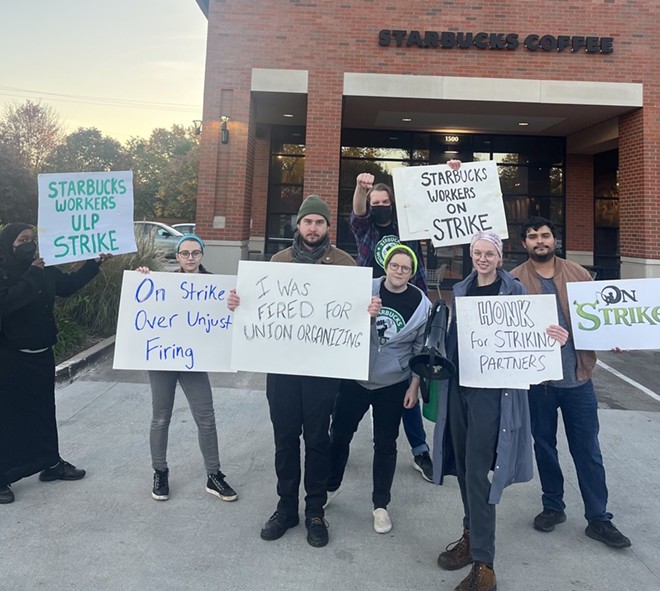 VIA BRADLEY ROHLF
Workers at a Ladue Starbucks, located at the intersection of Lindbergh Boulevard and Clayton Avenue, went on strike this morning after an employee was fired.

After an employee was fired on Friday morning, Ladue Starbucks employees have gone on strike, forcing the store to close.

Bradley Rohlf, a shift supervisor, says he was fired for his role as a union organizer and for wearing union-related T-shirts.

“They're just trying to dig up any kind of details they can to find a reason that they can justify firing me,” he says. “They want to target me specifically because I'm one of the most vocal organizers in the store, and I'm a shift supervisor.”

This morning Rohlf showed up at 6:15 a.m. for his regular shift. Shortly after, he was called into a meeting with his store manager and another local-area store manager, who informed Rohlf that he was fired.

“It's the same way — if a police officer follows anyone driving for long enough, they're going to find some reason to pull him over,” Rohlf says.

Starbucks has not immediately respond to a request for comment.

At 7 a.m., after Rohlf lost his job, almost all of the workers walked out, and the store closed due to a lack of staffing. The unionized staff plans to continue striking throughout the weekend.

Rohlf believes he was fired for his unionization efforts, despite what the termination note cites. He says the attendance violations are months old. The COVID-19 protocol violations, he adds, are weeks-old and are minor errors stemming from a failure to perfectly fill out and oversee the worker check-in forms.

Rohlf says the so-called dress code violations result from his union-related attire. He claims this is illegal after the National Labor Relations Board ruled that employers cannot ban staffers from wearing union attire in September.

The week after their previous strike in September, management met with Rohlf and three other staff members. They told the workers to stop wearing union-related T-shirts. He says management called the T-shirts “graphic” and argued they were in violation of Starbucks’ dress code policy.

“Almost everyone in the store had been wearing those shirts every once in a while on a semi-regular basis,” Rohlf says. “Some of us wear it more than others. But they only discipline four of the most vocal union organizers in the store, including myself.”

Rohlf continued to occasionally wear the shirt until he was fired on Friday morning.

In June, the Ladue Starbucks, located at the intersection of Lindbergh Boulevard and Clayton Avenue, became the first of five Starbucks in the St. Louis area to unionize. Staff at nearly 251 Starbucks in the United States have unionized over the last year.

But in late September, workers at the Ladue Starbucks held a one-day strike, claiming the company had cut the hours of employees, leading to understaffing, longer wait times and worker burnout. They believe it was retaliation for their unionization efforts.

“A year ago, we weren't having these problems because we were properly staffed and, of course, there wasn't any talk about union stuff a year ago,” Rohlf told the RFT after their first strike in September. “But it's clear that the company has been intentionally understaffing our store to once again try to push out employees.”

Workers across the country have accused Starbucks of firing workers for their unionization efforts. In January 2022, seven members at a unionizing Memphis Starbucks were fired. A federal judge later reinstated the workers.

Rohlf says he doesn’t want to stop working at Starbucks. He plans to file an unfair labor practice charge with the hope of being reinstated and receiving back pay.

“We’re fighting for each other's livelihoods,” he says.