Lake of the Ozarks Bar Responds to Party Backlash: 'No Laws Were Broken' 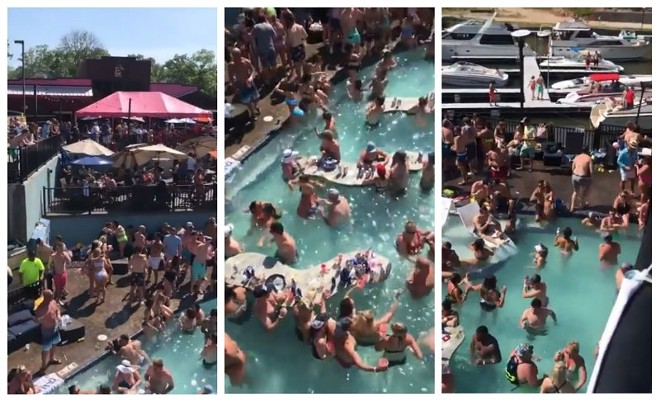 Backwater Jack's was the scene of a wild party this past weekend that went viral, likely in more ways than one.

The owner of a Lake of the Ozarks bar that was the scene of a wild pool party this past weekend has released a statement after several photos and videos that show large crowds and a complete lack of social distancing at the event went viral, quickly becoming international news.

Gary D. Prewitt owns Backwater Jack's, the bar at the center of the controversy, and is defending the decision to go forward with the party, dubbed "Zero Ducks Given," while insisting that safety measure were in place for the event.

"No laws were broken," the statement reads in part. "Social distancing is not a crime."

Prewitt then quotes the Camden County Sheriff's view of the matter, which reads as follows:

Camden County is a tourism-driven economy and each business is working hard to follow the state’s guidelines and protect their patrons and staff. Those who frequented the businesses, bars, and restaurants at the lake this weekend made a conscious decision to attend each event and frequent each location. It was the right and responsibility of each individual who made those decisions to access the risks inherent to those decisions.


Prewitt's statement goes on to claim that temperature checks were conducted at the entrances to the pool by medical staff hired for the event. "This upset many customers, however it was an additional layer we chose to implement," he writes. The statement says that anyone with a temperature above 100.4 was turned away. Additionally, Prewitt says that free bottles of hand sanitizer were made available for all guests upon entry and throughout the party.

And, contrary to some assumptions, Prewitt says the "Zero Ducks Given" name of the party was not related to COVID-19 in any way. He says this is the third year that the party has taken place.

Prewitt defends the bar's decision to play host to the event, pointing to the economic hardships the bar has already seen in the face of lockdowns meant to slow the spread of coronavirus.

"Unfortunately, our business is seasonal and nearly a third of our season has already been lost," he writes. "The initial shut down has already had a tremendous impact on many of our staff and their families. All staff were given a choice of whether they wanted to work without any negative consequences if they chose not to."

All told, Prewitt seems to indicate that he has no regrets with the way things played out.

"For our loyal customers who stand in support, thank you," he writes. "For customers we may have lost, thank you for your previous patronage and we hope to win your business back in the future. We stand by our decision to move forward with Memorial Day Weekend plans."

Meanwhile, leaders and health officials across the state have harshly condemned the complete lack of social distancing and large crowds seen at the event, with St. Louis County Executive Sam Page issuing a travel advisory in response and requesting that any county residents who were at the event self-quarantine for fourteen days.

"This reckless behavior endangers countless people and risks setting us back substantially from the progress we have made in slowing the spread of COVID-19," Page said in a news release. "I encourage everyone to follow the Department of Public Health advisory to determine a safe path forward in the workplace."

Photos from the wild party went fully viral, leading to coverage from CNN, CBS News, the Washington Post, TMZ, the Boston Globe and countless others.

So widespread was the coverage that there are already commemorative shirts ridiculing the event for sale by an Iowa-based t-shirt company.

The slogan emblazoned on those shirts is concise in its assessment: "Lake of the Ozarks: An international example of bad judgement."