Small children and their parents still lingered at the City Museum downtown when I got there at five after six on Wednesday night. Workers in red shirts were running around getting cables and speakers hooked up for the bands. I met Don Stueck in the front entrance by the ticket booths. He was carting three trays of Mama Campisi's toasted ravioli. They smelled delicious. I shook his hand and followed him to the kitchen where he put the trays into warmers.

He was getting ready for the party. The "Fight for Your Right to Slide" party. This party was for the supporters of the City Museum. The story began with a news report about the injuries sustained at the museum over the years.

Rumors started circulating about the museum shutting down. To help prevent this, a Facebook.com group called "Keep the City Museum'' was formed. More than 8,500 people joined the online group.

The City Museum staff and administration heard about this and thought a party would be an appropriate thank-you to not only the Facebook group members but to the public. Management decided to throw the party, even though there was no danger of the museum actually closing. It was after all, just a rumor.

This party started at 6 p.m. and lasted until midnight. The night was filled with the music of Papa Smiley & The Brain Bananas and was followed by Madahoochi.

A Monster energy drink truck parked outside that supplied a constant flow of caffeine to the already excited youth. Food was donated by Mama Campisi's, Dads Cookies, Gus' Pretzels, Vess soda, and ice cream was donated by Ted Drewes. Sadly, there was not enough to last through the night. The only things left by 10 p.m. were cookies and Monster. Kudos to them. I know my stomach loved that combination late into the night. 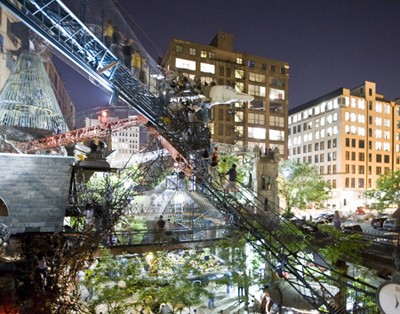 Whether it was the common bond of Facebook.com, guzzling Monster energy drink or enjoying barreling down a big slide at an age when most have shunned the fun of the playground essential, the camaraderie among party-goers was evident. They loved the City Museum and they were all happy that it was staying open.