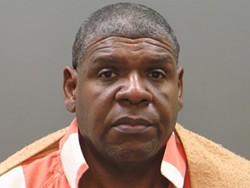 Lester Davis, 57, was sentenced to 14 years in jail Monday after shooting up a Wentzville barber shop during a conversation about the shootings at Sandy Hook Elementary School in Newtown, Connecticut.

Davis, of Wentzville, pleaded guilty to second-degree assault, armed criminal action and being a felon in possession of a firearm, according to the St. Charles County prosecuting attorney's office. Each count costs Davis seven years in prison, but he will serve the assault and criminal action sentences concurrently.

After a violent attack at Sandy Hook Elementary left twenty children and six adults dead in December 2012, a man at All Cuts Barber Shop mentioned that the shooting made him want to murder Adam Lanza, the twenty-year-old suspect.

For some reason, that statement caused Davis to lose it. He stepped out of the shop, got his loaded Smith & Wesson 9 mm pistol from his Volkswagen sedan, walked back in and shot three times at the man, according to the St. Louis Post Dispatch.

"I'll let you slide," Davis told the man before walking out of the barber shop and driving away. He later turned himself in to police.

Davis also has a felony conviction in New Jersey and a history of altercations with neighbors resulting in orders of protection against him.