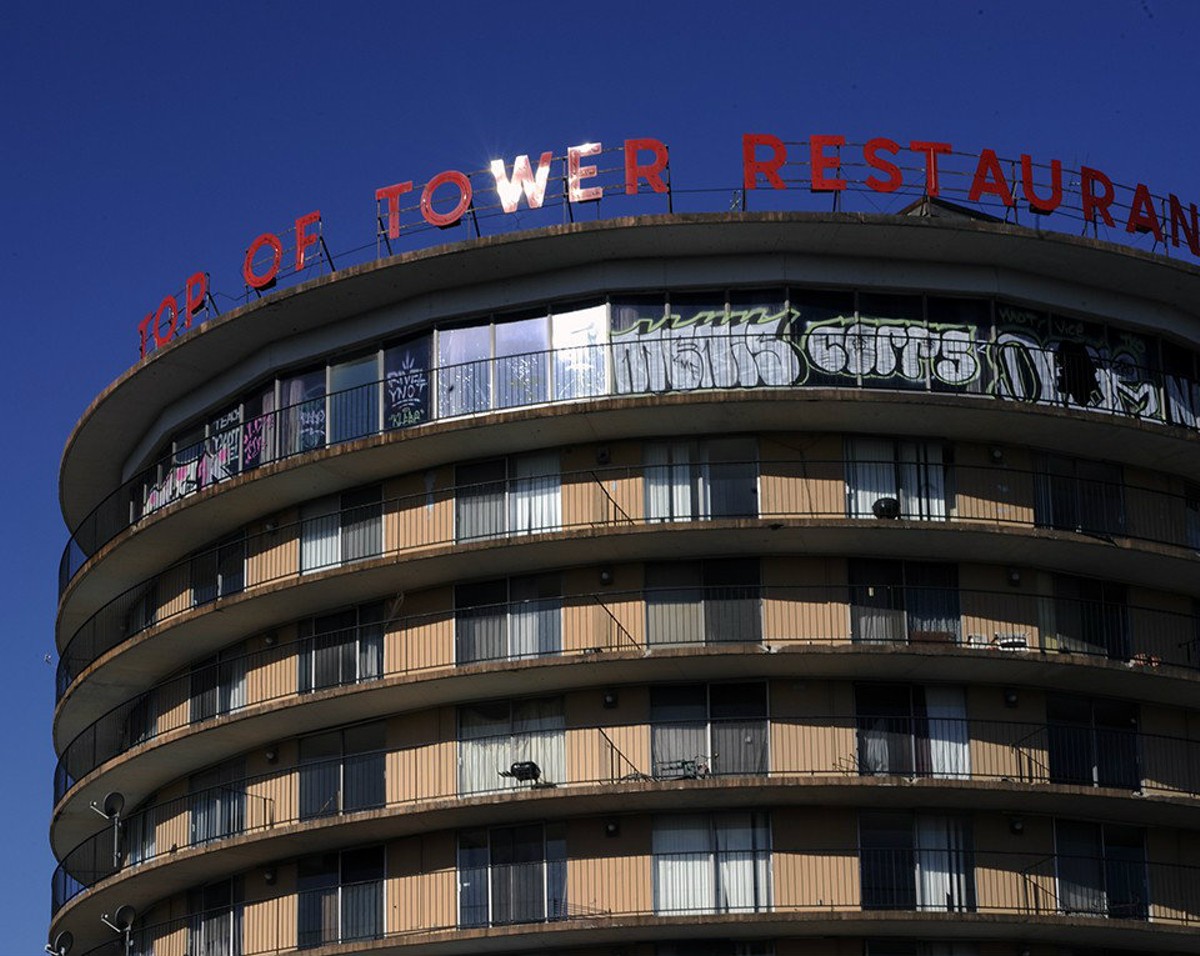 The Lewis & Clark Tower's circular presence on the north-county landscape is more than a bit exaggerated in scale, its mid-century modern design a bold reminder of architectural notions from another time. Surrounded by single-story, frame-and-brick ranch homes on one side, roads and parking lots on the other three, the unusual 10-story cylinder cuts a sharp contrast to its neighbors.

A landmark at the intersection of Lewis and Clark Boulevard and Chambers Road since 1965, the Tower showcased its human element for years, with its small terraces filled by BBQ grills, satellite dishes and clotheslines. These small touches suggested that an alien craft hadn't, in fact, landed onto the anchor position of a suburban strip mall. Today, though, a drive-by visitor wouldn't be blamed for not knowing what the structure was at the height of its use. The only real clue above graffitied walls and broken windows is the signage on its roof: Top of Tower Restaurant.

It was more than a restaurant, of course. In its heyday, the Tower was the ultimate suburban magnet, a destination for moviegoers, grocery shoppers and bowlers, with a residential component that spoke to the '60s idyll of having all your needs bundled together, with ample parking for all. The Tower really mattered to north county then, a robust engine of commerce, a home to dozens of residents and a place that said, "This is how we'll live, play and shop in the years to come."

The structure has been abandoned for not quite a half-decade, but the death signals came long, long before the town of Moline Acres issued the final condemnation orders in 2014. In the years before that, the condos and businesses inside had suffered internal strife within the condo association, disputes with out-of-state ownership and a general lack of upkeep, with various units losing access to essentials like working elevators and hot water. By then, the in-house pool had long since closed and the on-site movie theater and bowling alley were solely memories.

Today a few seemingly operable cell phone towers exist on the rooftop, the only functional items within the Tower's footprint. And while several long-running businesses remain active in the adjacent plaza, questions about its future are prevalent. Answers are much more elusive. 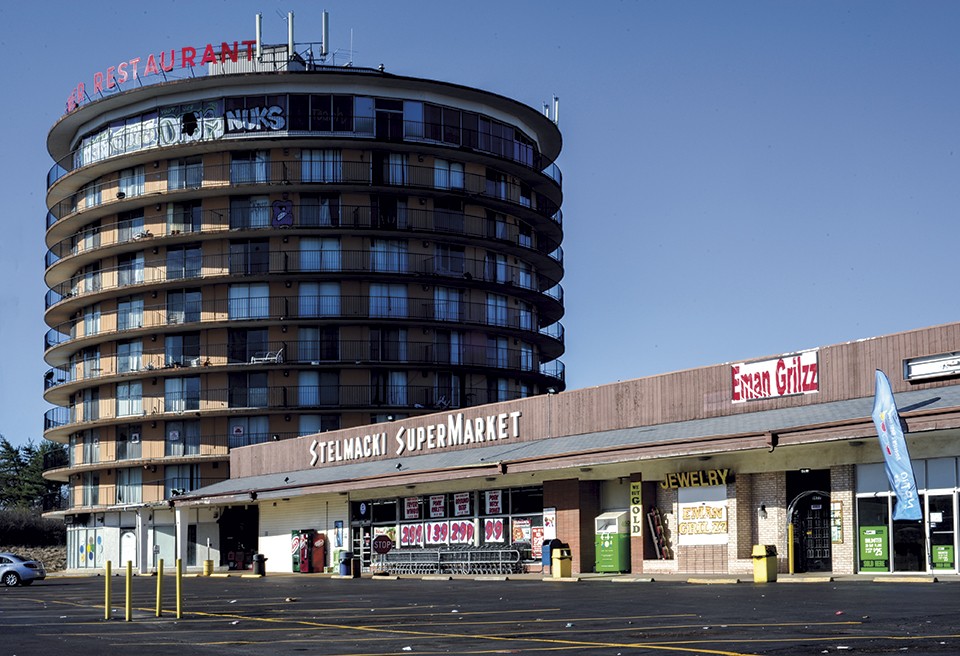 KELLY GLUECK
"Come in here on a Friday afternoon or a Saturday morning, and our whole parking lot's full," says Tom Stelmacki, whose business is based in the Tower's adjacent plaza.

Tom Stelmacki is a manager at the business closest to the Tower, Stelmacki's Family Market, an apt name. It's an old-school grocery in the absolute best sense; it's tidy and trim, with design elements that haven't changed a lot since the store opened in 1965, like the wooden, farm-like shingles hanging above the meat department, where Tom's brother Mike works.

"It was a hustling and bustling area right here," he says. "The Top of Tower was one of the best restaurants in all of north county. I remember the limos pulling up and dropping people off on Friday and Saturday nights. I remember the kids going to proms and dinner dances there. You had the bowling alley, the movie theater. It was all right here and when that was all going, it was bustling, busy."

As the businesses up and down the retail plaza flourished, then receded, then hung in, Stelmacki's thrived, becoming something of a destination of its own. These days, Stelmacki says that folks come from all over the area for specific items at his expansive grocery, especially the store's most popular element: its meat market.

"We're all happy here," he says. "We've been here all my life. I know the people that shop here. Those who've been coming for years, we know by name. Everyone that I employ is from the area. We've given a lot back to the area by being here, and we didn't ever give up."

Stelmacki is often found in the shop's narrow, paneled office, talking to customers on the phone, ordering products, monitoring the day's affairs. His sister, Nancy Weber, works a few feet away at the service desk. As a businessman, he tends to both the grocery's essential needs and probably a few tasks that shouldn't fall on his plate, but do.

For example: He and his staff often pick up trash on the parking lot. Much of it has blown over from the abandoned and emptied Tower, located just a few dozen feet from the market's front door. He has a lawn service mow the grass at the Tower, too, if only to "help take care of it as best as we can."

"It's not for our business to have to do," he says. "It's not our position, really, but if it's not getting done, you have to do it. You have to keep it clean."