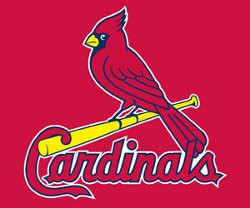 Hear ye, hear ye, by the powers vested in the Council of Redbird Fandom (i.e., Miller Lite, 93.7 The Bull and Gen X Radio), it shall be declared that Thursday, March 31, is an official holiday in the city of St. Louis.

In honor of the Cards' home opener against the Padres tomorrow at 3:15, you now have permission from your fellow die-hard lushes to skip that scheduled afternoon board meeting and head down to the ballpark. And for those of you who are particularly enthusiastic about avoiding your boss all in the name of baseball, the Redbird Fandom Council is inviting you to a morning rally at Paddy O's, next to the stadium.

Of course, the city government is not exactly on board with such a holiday ... yet.

That's why the organizers of the "Make Opening Day an Official Holiday" rally at Paddy O's would like you to add your signatures and testimonial videos to a collection that will be presented to Mayor Francis Slay in hopes of gaining a City Hall imprimatur to make Opening-Day Day an official holiday.

And hey, think of all the benefits to the city; for each 30 minutes a fan is away from his desk, another four dollars gets poured directly into the city's economic engine -- in the form of an icy, frothy, hoppy business transaction. "Imagine the additional revenue for the city and downtown entertainment businesses if the whole city had the day off!" said Clear Channel Radio Marketing Director Craig Carmichael in a press release.