Local Control Bill To Be Included in Special Session 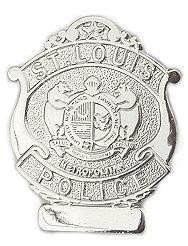 St. Louis is one step closer to controlling its police department.
Our cover story last week "Just Who Does Jamilah Nasheed Think She Is?" suggested that a bill to bring police control back to the city of St. Louis is likely to pass sometime soon. The only question was, would it be included in this fall's special session or would supporters have to wait until 2012's regular session?

Well, yesterday Governor Jay Nixon officially called for the special session on September 6 and announced that local control would be on the agenda.

The proclamation brings St. Louis one step closer to regaining control of its police force for the first time in 150 years. Indeed, the mere fact that it will be part of the special session indicates how close the bill is to passing -- Nixon probably wouldn't have included it in the session if he didn't think it had the votes. And he has good reason to believe that it does.

As we wrote in the cover story:

The police union announced its approval of the bill on the final day of the legislative session. The block of opposition vanished. But the bill was held up by a group of senators who wanted cuts on historic and low-income tax credits in return. The bill died before reaching the floor for a vote.

The votes are there, though, and just about everybody thinks passage is inevitable, either in September's special session or in the 2012 session.

"I don't see any real reason why it wouldn't pass, given that all the folks on both sides have worked out the issues," says House Minority Leader Mike Talboy.

"I think I have the votes to do it," says Senator Joseph Keaveny, sponsor of the Senate bill.

"As the bill stands, I'm OK with it," says Chappelle-Nadal.

"With each passing day it looks more and more likely," says Roorda. "I can't find anyone who thinks this is unlikely."

"I'm not aware of any opposition to the bill at this time," says Slay.

So the question became whether Nixon would add the bill to the special session agenda. State Senator Maria Chappelle-Nadal, who was an outspoken critic of the local control bill that passed out of the House in February, told St. Louis Public Radio last month that she didn't think local control should be a part of special session: "When we go into special session it's usually for an economic reason or an emergency."

Local control supporters, on the other hand, argued that the bill should be included because it unjustly died before reaching the Senate floor in May after being held hostage by Senators who were pushing for unrelated tax reform legislation.

Furthermore, they asserted, adding the bill to special session benefits not only the legislators who have pushed for local control, but also the police union, which got behind it in May. As we wrote, one reason the union backed the bill is because they wanted to avoid a local control ballot initiative, over which they would have little, if any, input. If the local control bill would not have been included in the special session, Rex Sinquefield, who was behind the initiative, would have had to begin rallying signatures in the fall to get local control on the ballot in 2012, as a cover in case the bill did not pass in that year's regular session. An active ballot initiative is a wildcard the police union did not want to see lingering.

In addition to local control, the special session includes legislation on the Lambert Airport China hub, various tax breaks intended to bring and keep businesses in Missouri (including the Missouri Science and Innovation Reinvestment Act, which creates a fund for science and tech companies), and a change in Missouri's presidential primary date, among other proposals.

When Nixon made the announcement, there might not have been a happier person in Missouri than State Representative Jamilah Nasheed, the sponsor of the local control bill in the House and the subject of our cover story. She has made it a personal mission to bring local control back to St. Louis.

"I'm extremely elated," she said a couple of hours after Nixon's proclamation. "The governor made the correct decision to make local control a part of the special session. The people's voice has been heard."