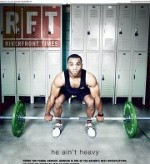 Derrick Johnson, the profile subject of our March 22 feature, He Ain't Heavy, continued his media rounds yesterday, appearing on Sports Mayhem USA With "The Coach" John Parker -- an online talk show airing weekdays on iwatchradio.com -- to discuss his recent firing from Lindenwood University, where he'd been serving as head coach of the Olympic weightlifting team.

During the interview, host Parker questioned Johnson about possible racial motivations behind the firing and whether or not he planed to sue.

Johnson demurred to Parker's question, declining even to give his opinion, and stuck to the basics.

"I'm just putting the facts out there," said Johnson. "We knew everything was going good. We knew I'm one of the top coaches in the country. And we're getting ready for the biggest competition coming up in a matter of three weeks, and this is the decision they made to do."

Johnson went on to claim that since his firing, "less than 40 percent of the team is there."

Johnson hasn't pursued legal options. But toward the end of the segment, Parker, himself a former coach, indicated that he once filed a racial discrimination suit after being fired. He implored Johnson to contact the Equal Employment Opportunity Commission and retain an attorney.

"It's kind of like walking into an old dirty house," he said. "If you turn the light on the roaches will run for cover. But in the dark they get to run free. I would suggest that if there is light to be turned on in this situation, turn it on as soon as possible."

Watch the clip below. Johnson appears at the 17 minute mark.