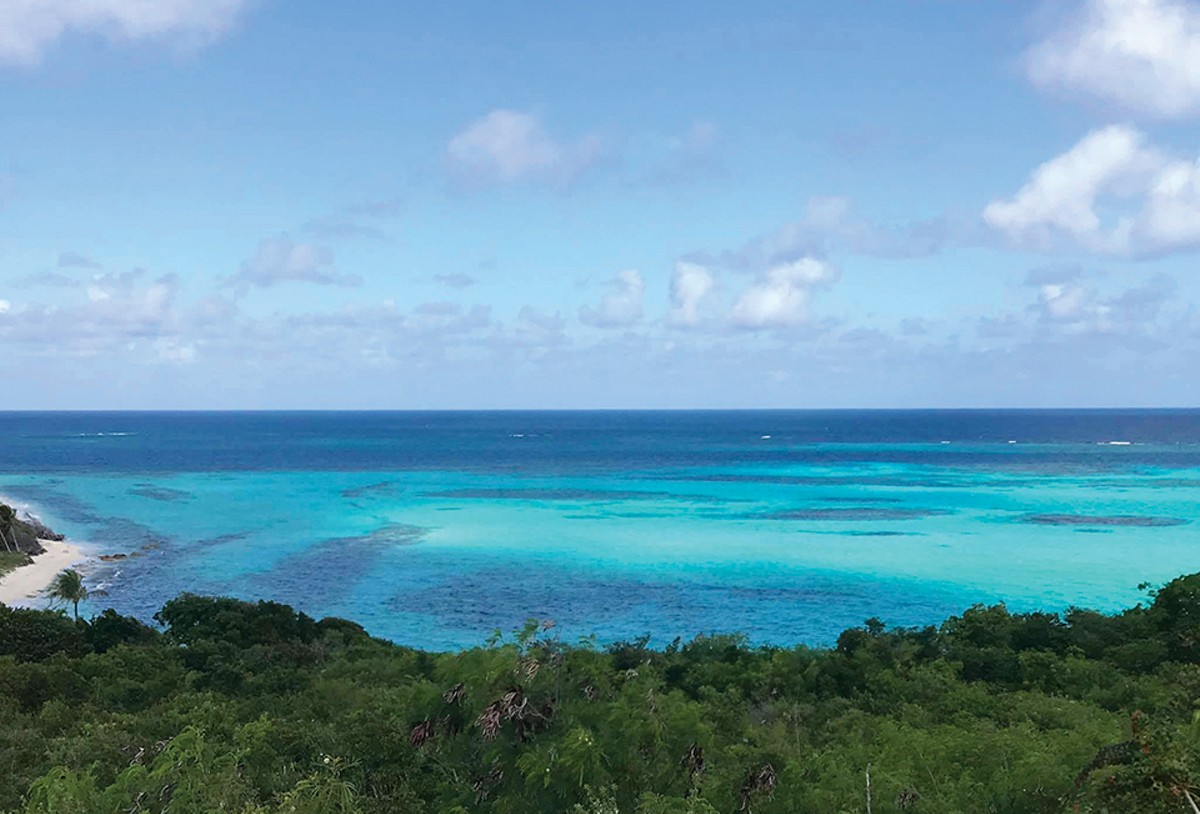 Anguilla’s Shoal Bay is known as “the Queen of the Caribbean.” MIKE AGUIRRE

When Michael "Big Mike" Aguirre took a trip to the Caribbean in March, he figured he'd probably stay for ten days or so, tops. A soul and R&B artist, guitarist and bandleader who, alongside his Blu City All Stars, serves as a staple of St. Louis' thriving blues scene, Aguirre was slated to perform at the 30th annual Moonsplash Reggae Festival on the tiny island of Anguilla, just east of Puerto Rico and the Virgin Islands. The long-running event, organized by Anguilla reggae artist and cultural ambassador Bankie Banx, was set to run March 12 through 15; Aguirre, who has made multiple tour runs through the Caribbean in recent years, figured he'd do the show, visit friends on the nearby island of St. Thomas and then head home to St. Louis. COVID-19 had other plans.

As the novel coronavirus made its way around the world, it brought travel restrictions with it. By March 17, it had become clear to Aguirre that trying to hop on an airplane would be a nightmare, so he and his partner Kristin Babcock, herself a St. Louis scene staple as general manager of BB's Jazz, Blues & Soups, decided they'd be better off staying put for a while.

"We figured, let's wait and see two weeks, see what happens, because we don't really know what we're dealing with yet," Aguirre says of the decision. "And also I didn't have a whole lot of confidence in the [Trump] administration's ability to successfully navigate through that.

"That seems to have been good instincts," he adds with a laugh. Those two weeks have turned into nine months. Within days of the music festival, leaving the island ceased to even be an option. Anguilla officials closed its airport and seaport on March 20. The ferry that shuttles visitors to nearby St. Martin, where there is a commercial airfield, left that weekend with no date for its return. The territory was officially locked down, with no one able to come or go, by air or by boat.

Further measures to combat the spread of the virus were soon implemented as well. The government instituted a shelter-in-place order, allowing restaurants to operate as carry-out only and limiting the size of public gatherings to no more than twelve people. On March 26, the island saw its first cases of COVID-19 — one a 27-year-old American woman and the other a 47-year-old Anguilla resident who had been in close contact with her. They were quickly identified and separated from the rest of the population.

"So they were in quarantine. They got better, and then at that point protocols were put in place where you couldn't get in," Aguirre explains. "Some people might try to sneak in on a raft, but they had shore patrols and boats. No boats were allowed to come up, no flights coming in, no ferries coming in."

The measures worked. To date, Anguilla, with a population of about 15,000 people and a footprint of just 35 square miles, has seen no community spread of the virus. As of the time of this writing there have only been ten total confirmed cases — none of them fatal.

"So they managed to put a lid on it," Aguirre says.

MIKE AGUIRRE
Kristin Babcock, who arrived with Aguirre to the island in March, raises the Jolly Roger.

Meanwhile, the situation in the United States went haywire fast. Charitably speaking, it could best be described as an unmitigated shitshow, with more than 350,000 dead amid uncontrolled spread while elected officials on both sides of the aisle and at all levels of government have abdicated responsibility of any kind. Citizens are at each other's throats in the absence of any true leadership, and large swaths of the population have outright labeled the illness a hoax. As a result, hospitals are filling to capacity, and lockdown orders remain in place across much of the country.

Looking at it from an outside perspective, Aguirre is befuddled.

"I don't know what words to use to describe whatever the fuck just happened in the States over the last nine months," he says. "Other than a guy trying to win an election and he didn't, so it was all just a big waste in the way we handled it."

In light of all that, even when Anguilla did open up for travel again, and Babcock headed back to St. Louis in October to attend to familial obligations, Aguirre decided it best to just stay put. Instead of dealing with anti-maskers and sickness and economic ruin, he's in limbo on an island paradise with 33 beaches and no COVID-19 to speak of.

"Literally, of all of the places in the world, including St. Louis, this was beyond fortunate to wind up here," Aguirre muses. "Almost like it was no mistake."