Love Your Lefty: St. Louis Gets Its Very Own Leftorium 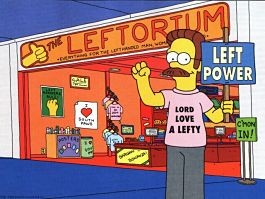 In this age of rampant political correctness and respect for all minorities, there is one group that has been consistently overlooked. They fail at the most basic kindergarten tasks, such as cutting and shoe-tying, and have to force their bodies into uncomfortable contortions in order to enjoy adult pastimes like playing cards and opening wine bottles.

We refer, of course, to the left-handed, who make up ten percent of the population.

That is about to change. A week ago last Saturday, Nancy Smith opened her store Love Your Lefty downtown at 328 North Fourth Street. It's fully stocked for things to make life easier for the left-handed, including special scissors, corkscrews, spoons, toothbrushes, playing cards, pens with quick-drying ink, pencils with non-smearing lead and notebooks with spirals on the right-hand side. (These could also come in handy for those who write in Hebrew and Arabic, which go right to left.)

Smith herself is right-handed, as is her daughter and business partner, Carly, but her son Colin was a lefty. This made her sensitive to the special needs of the cack-handed. At age six, for instance, Colin decided he wanted to learn how to tie his shoes properly instead of wearing Velcro. It was quite an ordeal. This is why Love Your Lefty stocks special boards that guide young southpaws through the process of tying a bow-knot.

Smith has become a passionate advocate for lefties and is happy to demonstrate her products to all visitors, even righties.

"Try using right-handed scissors in your left hand," she commands, holding out one of the pieces of paper she keeps on hand for demonstration purposes. "You're not pushing the blades together, and you have to look underneath to see what you're doing. Now try the left-handed scissors. Isn't that better?"

Nancy Smith shows off her wares. The t-shirt reads, "All people are born right-handed, but only the GREATEST overcome it."

As of last Friday, when her store had been open less than a week, Smith had already sold out her stock of left-handed playing cards. Why do lefties need special cards anyway? Smith pulls out a pack of standard cards and fans them out righty style.

"See how the numbers are in the upper right corners?" She fans them in the other direction. "Now if you're a lefty, what do you see? Nothing!" The lefty cards have the numbers in all four corners.

Love Your Lefty is not limited to products to make life easier for lefties. There are also items, such as coffee mugs and t-shirts, to make so they can show their pride, and books, notably The Left-Handed History of the World, that lets them know they're in distinguished company.

Smith originally opened the store as a kiosk in the Galleria last fall, but moved downtown to take advantage of the tourist trade from the many nearby hotels.

Sadly, Smith's favorite lefty, her son Colin, died last year of a heroin overdose. He was 20. "This store is in his memory," says Smith. "I know he wouldn't want me to wither away. He'd want me to do something."