He Made a Life as a Career College Student. The Feds Weren't Having It 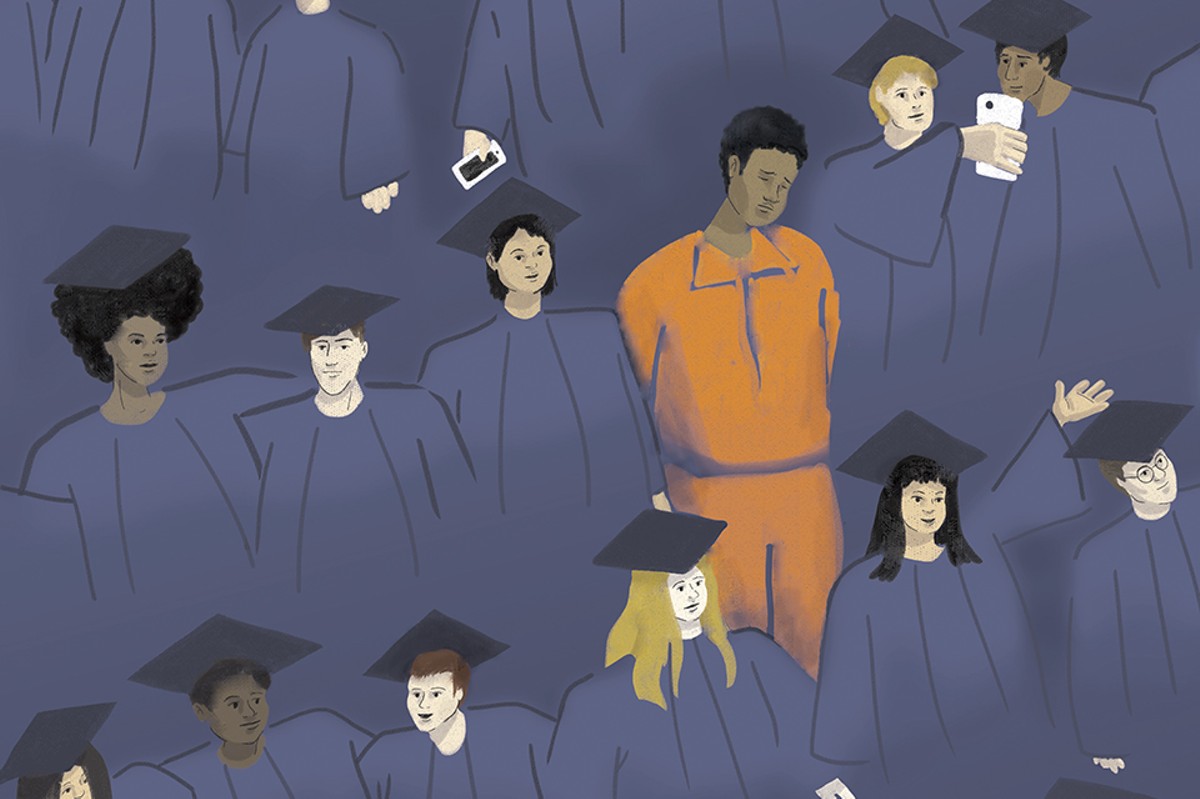 Malachi Duncan attended more than a dozen colleges before federal prosecutors put an end to his game. ILLUSTRATION BY SUSANNAH LOHR

Malachi Duncan slips out of a dark corner of the community college theater and onto the stage.

He is in full costume. A white jacket fits crisply over his skinny, six-foot-two frame. A matching white shirt and black bow tie add to the formal air of the butler's uniform.

The play is Cat on a Hot Tin Roof, a tale of desperation and deceit within a family of schemers. The main characters are complex and intriguing, but Duncan does not have one of those roles. He plays Lacey, a black servant who, in some adaptations of Tennessee Williams' drama, is reduced to an unseen voice piped in from off stage. His job is to prop up the main players, serve as an under-drawn reminder of the family's casual racism.

"I'm coming!" he cries and hurries across the stage during possibly his most dynamic scene. "I'm coming!"

Appearing here, even in a limited role, seems like a crazy risk in retrospect. Duncan should be lying low. He enrolled at Jefferson College for the 2013-14 school year using the name of a friend with whom he is sharing his ill-gotten financial aid checks. He wrote the friend's social security number on the applications and will use it to set up bank accounts, obtain a fraudulent driver's license and even get a job at a campus day care.

These are federal crimes, and he could be exposed with a minimal amount of scrutiny. But here he is, literally stepping into the spotlight, conducting a performance within a performance.

Duncan is friendly with the other actors but not close. He has felt like an outsider his entire life, and he does not have much in common with the rest of the cast. They all come from placid small towns within twenty miles of the college's Hillsboro campus. Duncan grew up in East St. Louis, raised primarily by foster parents as a protection against a mother whose history of neglect and abuse made national news before he was even born. Even today, people of a certain age in his hometown trace his lineage to one of the worst tragedies the city has ever seen.

In Hillsboro, they don't even know his real name.

The production of Cat on a Hot Tin Roof ends after a four-show run in October 2013. Duncan auditions for the next semester's show but is not cast.

Michael Booker, the college's division chair of fine arts, remembers only the barest of details about him. An experienced actor himself, Booker played the role of Big Daddy, a dying patriarch whose duplicitous children are trying to undercut each other as they compete for his fortune.

"I'm very proud of the quality of the show," Booker says in an email. "We had a strong cast."

Duncan seemed to have little experience, but that's where a lot of students begin, Booker says. One of Booker's favorite things about performing with the college's theater department is seeing newcomers grow into larger, more complex roles through the course of several plays. But he never worked with Duncan again. He never really had any cause to think about him again until more than two years later when visitors arrived on campus.

"I can assure you that we were all shocked when [federal agents] came by asking about him," Booker says. "We had no reason to think that he was involved with the crimes he's been accused of."

A college spokesman says they have seen cases of fraud before. Students are granted financial aid and never show up to campus, or they drop out after a couple of weeks and pocket the loan checks. Duncan's situation was different. He studied English and worked at the day care. After living off campus with his friend for his first semester, he moved into one of the college's dorms, just up the hill from the theater. If anything, Duncan was trying to embed himself even further into the college life.

"He wanted to play the part, if you will, of being a student," says Roger Barrentine, the college's director of public relations. "Eventually, his deeds caught up with him."