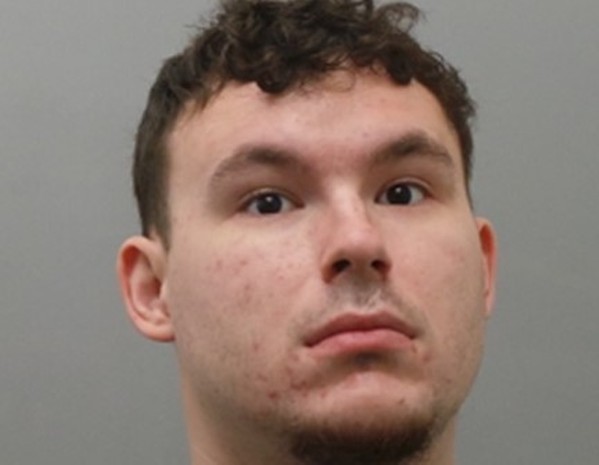 On the internet, no one knows you're a racist pedophile — unless, perhaps, your email address is [email protected], which is one of the real online aliases that St. Louis County police say was used by a man now facing charges for filming himself while sexually assaulting a minor last year.

According to charging documents, Michael Ulsas, of Sunset Hills, assaulted a female victim in May 2020. At one point in the footage of the assault, police said, Ulsas can be seen slapping the victim and telling her she has "five seconds" to resume a nonconsensual sex act with him.

But investigators digging into the 24-year-old's online activity found more than the footage of the assault. According to the St. Louis County Prosecutor's Office, Ulsas used a web of aliases on Facebook "to gain access to his alleged victim in this case" — accounts with names like "Micheal Lightning" and "Micheal Crispy Kanashi."

Analyzing the email addresses connected to those accounts brought investigators to more aliases, including the "racist pedophile" Gmail account.

The various aliases referenced in Ulsas' online footprint suggest he was involved in meme culture and 4chan-inspired troll communities where users often use racism, harassment and disturbing content as in-jokes.

On Wednesday, St. Louis County's top prosecutor, Wesley Bell, told reporters that while his office usually releases information about a criminal case after it's resolved, this situation is different.

"We believe there is investigative value in publicizing information about this defendant," Bell explained. "We are seeing a new dynamic with social media, and it is creating, unfortunately, an easier path for individuals to prey on people, particularly young people."

Some of Ulsas' online aliases (see the full list below) are still active, though it appears that at least one account has been taken over by other trolls. On Wednesday, when Ulsas was already in custody, one alias account on Facebook, "Michael Notafryguy," changed its profile picture to Ulsas' mugshot and posted a screenshot of his booking information under the caption, "I'm feeling really sad and alone [right now]."

Another post shared by the account on Wednesday included a link to news coverage of the charges along with a denial: "Everything in this article is fake."

This isn't the first time Ulsas has made the news. In 2019, he was briefly featured in a KMOV report about the use of facial recognition technology. In the segment, Ulsas was asked about the efficacy of using the technology to help reduce robberies at a local gas station. Ulsas was in favor, saying, "It deters people who are up to no good."

Ulsas is now facing charges for possession of child pornography and sexual exploitation of a minor. He is also charged with second-degree sodomy, which Missouri's criminal code defines as "deviate sexual intercourse with another person knowing that he or she does so without that person's consent."

Anyone with information about Ulsas or his associated accounts are being asked to contact the FBI at tips.fbi.gov or 1-800-CALL-FBI (225-5324).