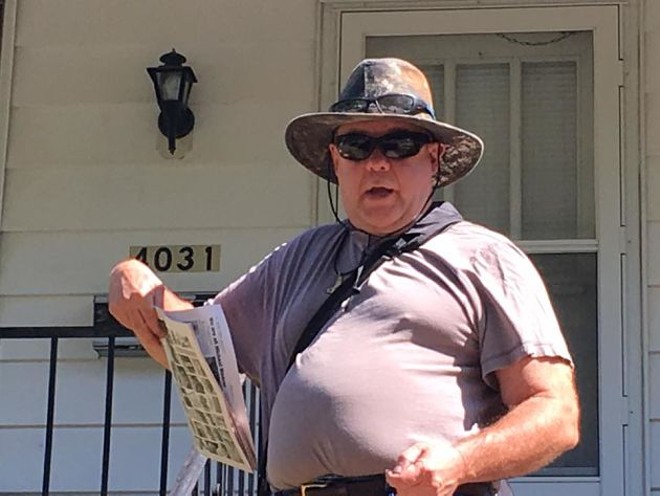 A man wearing no less than two pairs of sunglasses on his head simultaneously was spotted distributing a white supremacist publication throughout the Bevo Mill neighborhood on Wednesday afternoon.

The publication, which resembles a newspaper but in actuality is filled with racial slurs and hate speech, is known as The First Freedom, and is edited and published by an octogenarian named Olaf Childress who is based in Silverhill, Alabama. Its front page features a Confederate flag and the slogan "Aryan America vs. the Zionist media'cracy."

Childress has garnered the attention of the Southern Poverty Law Center, which famously tracks hate groups, for his completely ridiculous effort in 2008 to bury — literally bury, in a grave — the fourteenth amendment of the Constitution, commonly known as the "Equal Protection Clause." A copy of his publication was also found in Tamerlan Tsarnaev's apartment following the Boston Marathon bombing.

And now, it's in south city.

The front page of the publication features an editorial by Jason Kessler, one of the organizers of the "Unite the Right" rally. You can see a larger version of this page here.
How a St. Louis-area man with a fastidious dedication to eye safety ended up with a stack of Childress' papers is anyone's guess, but one thing is clear: He's taken it upon himself to distribute the publication en masse in the Bevo Mill neighborhood, drawing concern among residents.

One resident who asked not to be identified took it upon himself to follow the man for about 45 minutes on Wednesday afternoon after receiving one of the papers on his own doorstep. The resident also captured him on camera.

For the sake of anonymity we'll call our tipster Mike, though that is not his real name.

The story begins a day earlier on Tuesday, when Mike stepped out onto his porch to find The First Freedom at his doorstep.

"I went outside and found the publication rubber-banded to my door — it was between one and three o'clock," he says. "I just looked at the front page and I could see it was offensive, and probably distributed by a far-right or alt-right organization. And I looked down my street and could see copies of the same thing had been attached to my neighbors' doors."

Mike brought the paper inside and opened it up, finding that it referred to Jews as "fake people," denied the holocaust, used racial and ethnic slurs to refer to multiple groups and called the recent "Unite the Right" rally in Charlottesville a "Beer Hall Putsch," referencing a failed nazi coup attempt by Hitler in 1923.

"It's designed to look like a newspaper," Mike says. "But if you actually start reading any of the articles I can't imagine there's any newspaper in the world that would publish anything so incoherent."

Mike spoke to some of his neighbors about the publication, and one of them said they'd seen the man who had been distributing them. The neighbor gave Mike a description of the man, as well as his car.

"This kind of thing is bad to see in any neighborhood, and I was very disappointed to see it in mine," Mike says.

Then the next day, on Wednesday around noon, Mike spotted the car as it passed. He saw it turn down the street a few blocks from his house. Mike decided to follow the man on foot.

"Sure enough a man matching the description that my neighbor gave me was attaching copies of the literature to the doors and houses on that street," he says. "So I took pictures of his license plate and followed him — I wanted to get pictures of him."

Mike spent some 45 minutes wordlessly following the man as he placed what Mike estimates to be 40 to 50 copies of The First Freedom on people's doors. The photos Mike took made their way to social media earlier today, where they were quickly spread far and wide in neighborhood groups and social media apps.

"I did that because I like my neighborhood and I want it to be free of white supremacists," Mike says. "It's a really great place to live, and it's also a diverse place to live. I don't want anyone to get the impression that it's not a welcoming place. I hope anybody in any neighborhood would feel the same way.

"I do believe in naming and shaming," he adds.

As for the dual pairs of sunglasses — obviously not the headline item here, but definitely worthy of note as we consider what type of human being we're dealing with — Mike has little to add.