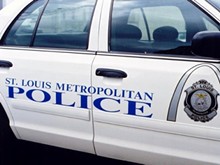 The man was shot after he allegedly pointed his gun at police officers.
A 22-year-old black man is in serious condition after he was shot multiple times by a St. Louis Metropolitan Police officer last night.

The young man was approached by several officers in the 6200 block of North Pointe around 9:35 p.m. (That's in north St. Louis, near the intersection of Goodfellow and West Florissant Avenue.) According to the police department's official summary of the incident, the man pointed his gun at them. A 32-year-old officer, a five-year veteran of the force, then fired off several shots.

The identities of both the suspect and the officer are being withheld by the department at this time. The officer has been placed on leave, as is standard procedure. The young man was taken to the hospital, where he remained in serious condition this morning.