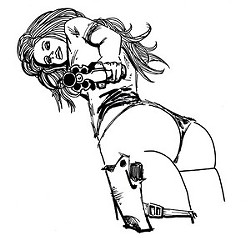 Police are searching for the suspect who shot and killed a patron at the Peek-A-Boo Club in Brooklyn, Illinois, around 4 a.m. this morning.

According to reports, a man was kicked out of the strip club for fighting. That same man allegedly returned to the club with the gun and shot two men in the parking lot. One of the victims is dead. The other injured. Police have launched a manhunt to find the suspect.

Peek-A-Boo was the scene of a 2009 homicide and is one of several Brooklyn strip clubs with a history of violence. In 2009 a woman was killed and her companion injured at the Pink Slip in Brooklyn. A few weeks later, another man was shot at the same club.