Man Stealing Girls' Underwear from Walmart Just as Creepy as Anticipated, But Still... 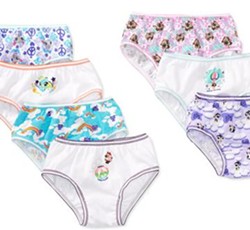 walmart.com
Daniel Scalf, of St. Louis, was sentenced to more than nineteen years in federal prison last week for a misstep begun in a southwestern Illinois retailer.

According to prosecutors, local police picked up Scalf, 32, last January for shoplifting "little girls' underwear" in the Collinsville Walmart. A kinky offense, yes, but hardly something that would merit nineteen years in the pen.

It was during police questioning, however, that police say Scalf began acting suspiciously about the cell phone he had on him during the arrest. That prompted police to contact an FBI detective assigned to the metro East St. Louis cyber-crimes task force.

Can you see where this is heading?

The detective found two images of child pornography stored inside the phone. Scalf later admitted to emailing himself the images from his old cell phone. He also allegedly emailed himself child pornography from a computer at Southwestern Illinois College.

Scalf was sentenced last Friday to 235 months in federal prison (19.5 years) and a lifetime of supervised release. That latter seems to make sense. But in regards to the prison sentence: Sure, Scalf is a perv, but nineteen years of incarceration for a couple lewd photos?!

"This is a well-deserved sentence for someone who was victimizing our children," says United States Attorney Stephen Wigginton. "These cases are about real children who suffer a lifetime over how they are portrayed and their images used by criminals like Mr. Scalf."