Man Tries to Make Late-Night Tire Sale, Gets a Bullet in the Leg Instead: Police 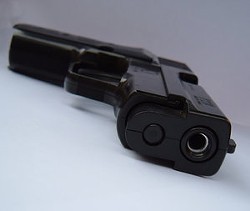 He wanted to sell a tire. He got a bullet in the leg instead.

A 49-year-old man was left on the side of the road with a bullet-sized hole in his thigh Tuesday night after trying to sell a tire at a gas station.

The victim told St. Louis Metropolitan Police that he met his attackers at a gas station, where he offered to sell them a tire around 9 p.m., according to police reports.

The suspects -- two men and a woman -- asked the man to follow them in his car while they went to get money for the tire. The man agreed, but police say he soon became suspicious and pulled over at N. Euclid and Warwick avenues.

The other car pulled over, too, and one of the men -- a 150-pound man, 5'10" with gold teeth and a black-and-gold baseball cap -- got out of the car, pointed a gun at the victim and announced a robbery.

The men struggled, and the suspect shot the victim in the thigh. The suspect and his two friends then took the victim's money and vehicle and fled.

Police described the two other suspects as a 5'5" man with a black baseball cap and a heavy-set woman with curly hair.

The victim went to the hospital, where he was in stable condition.

The victim reported that while at a gas station, he encountered the suspects and offered to sell them a tire. The suspects asked the victim to follow them to get money for the tire. The victim complied but soon after became suspicious and pulled his vehicle to the curb at Euclid and Warwick. While both vehicles were pulled over, Suspect #1 exited the vehicle, pointed a handgun at the victim and announced a robbery. A struggle ensued and the victim was shot in the thigh. The suspects took money and the victim's vehicle and fled. The victim was conveyed to hospital where he was listed as stable. The investigation is ongoing.