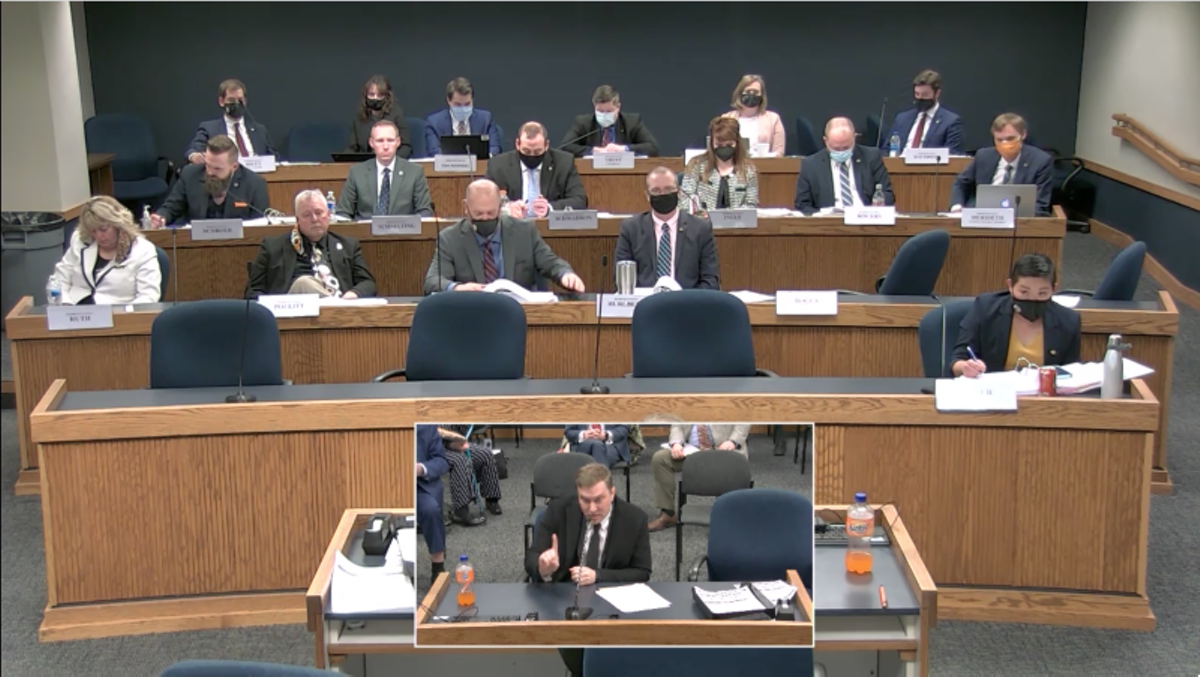 During a recent hearing on his bill to establish the “Stop Social Media Censorship Act,” state Rep. Jeff Coleman repeatedly referenced experts sitting behind him in the audience who would be better able to address questions about the legislation’s legality.

The first of these experts to testify was Chris Sevier, an Iraqi war veteran, Tennessee attorney and advocate who has pushed anti-LGBTQ and anti-porn legislation in statehouses across the country — and was deemed a “security concern” in the Missouri Capitol two years ago.

Sevier may be best known for suing states that wouldn’t recognize his marriage to his laptop — a move to protest gay marriage. He’s also made headlines for past legal issues, including being charged with stalking and harassing country music singer John Rich and a 17-year-old girl.

In 2011, Sevier’s Tennessee law license was moved to “disability inactive status” due to being “presently incapacitated from continuing to practice law by reason of mental infirmity or illness.”

Meanwhile, Sevier has been connected to controversial legislative efforts across the country for years — often leaving uneasy interactions in his wake.

Last month, Sevier was escorted by security out of the Oklahoma Capitol after an altercation with a lawmaker. Three years ago in Rhode Island, a state senator withdrew a bill pushed by Sevier, citing its “dubious origins.”

After Missouri Senate Administrator Patrick Baker sent an email to senators and staff with a photo of Sevier and the subject line “security concern” in 2019, Sevier filed a federal lawsuit against him alleging defamation. The lawsuit was dismissed the same month.

The “Stop Social Media Censorship Act” is the latest of his legislative initiatives to find its way to Missouri.

Social media posts and draft legislation uploaded online indicate Sevier has crafted versions of the bill, in addition to a handful of others, for all 50 states. He’s also been working to find lawmakers to sponsor his bills since the fall.

The bill would allow Missourians whose political or religious speech is censored on large social media platforms to bring lawsuits against those companies. Opponents argue the legislation is unconstitutional and would impede platforms’ ability to remove objectionable content, while supporters say it’s necessary to give users a voice.

“He asked me to carry that bill, and I agreed to it,” Coleman said, later adding: “In general, I think it’s a very good bill, because we have to figure out something in order to stop what’s going on.”

When reached by phone by The Independent Tuesday afternoon, Sevier said, “You can kiss my ass,” before hanging up.

Coleman, who was elected in 2018, said he had previously never heard of Sevier.

“As a legislator, you’ve got so many things going on, so many bills you’re trying to keep up with, you really don’t have time to do a background check on someone,” Coleman said.

But after learning of Sevier’s past following his testimony at last month’s committee hearing, Coleman said he is moving forward without Sevier’s input and working to refine the bill.

“He seems like a nice enough guy. But there’s enough out there that’s a concern that we don’t have him helping us anymore,” Coleman said, later adding: “We don’t need those distractions, because this is an important issue. We want to make sure that that’s the issue, not him.”

Rep. Dottie Bailey, R-Eureka, is also sponsoring a version of the “Stop Social Media Censorship Act.” Bailey could not immediately be reached for comment Tuesday.

Despite detailing amendments and changes that he said would be made to Coleman’s House Bill 482, Sevier denied playing a role in writing the legislation when asked by Rep. Keri Ingle, D-Lee’s Summit, during the Feb. 22 hearing.

“We have many lawyers. We would respectfully submit that the bills are written out of multi-state federal litigation so it would be different suggestions from judges and courts — it’d be language that’s pulled from different pleadings and opinions, if you will,” said Sevier, who said he was not a lobbyist. “So there’s many people that we support (on) this bill. Rep. Coleman is the author of this bill. We support his bill.”

On the witness form he submitted to testify on the bill, Sevier did not list an organization that he’s affiliated with. But his connections to the bill and the groups he associated with aren’t hard to find.

Through filing federal lawsuits challenging issues, Sevier said judges are “communicating in ways in their opinions,” which guides legislation.

In the past, Sevier has filed a slew of federal lawsuits against companies like Apple for not restricting pornography on their products and to stop a Louisiana city from holding “Drag Queen Story Time.” A decision in 2018 litigation referenced over a dozen lawsuits Sevier filed since 2014 challenging same-sex marriage.

“And then from the federal lawsuits, we’ve been writing a litany of legislation for all 50 states that cover mainly the ‘culture war’ issues and hopefully to proliferate human flourishing, to restore the rule of law and to underscore constitutional supremacy,” Sevier told the New Jersey Constitutional Republicans.

A website for the “Stop Social Media Censorship Act” that details bills filed across the country doesn’t indicate what groups are affiliated with it. However, the website domain is registered to “De Facto Attorney Generals” with an Alabama address.

The bill language listed for Missouri, like many others linked from the website, shows suggested amendments in red text to House Bill 482 — some of which Sevier described during last month’s House hearing. And videos explaining the bill for each state are nearly identical.

From Facebook posts and news stories, Sevier appears to have been crisscrossing the country meeting with lawmakers in recent months. Standing in front of the Missouri Capitol, Sevier said in a video posted on Facebook on Jan. 6 that Coleman was already a sponsor, and that he was “looking for prime sponsors for the other four bills.”

In an October post to the Facebook page of Jenna Ellis, an attorney who served on former President Donald Trump’s legal team that tried to overturn the results of the 2020 election, Sevier shared a link to files of draft legislation he said he wrote for all 50 states, including talking points.

“What I need is a letter from the President endorsing the legislation that I can take to the statehouses and give to the Majority Leaders and Speakers,” Sevier wrote. 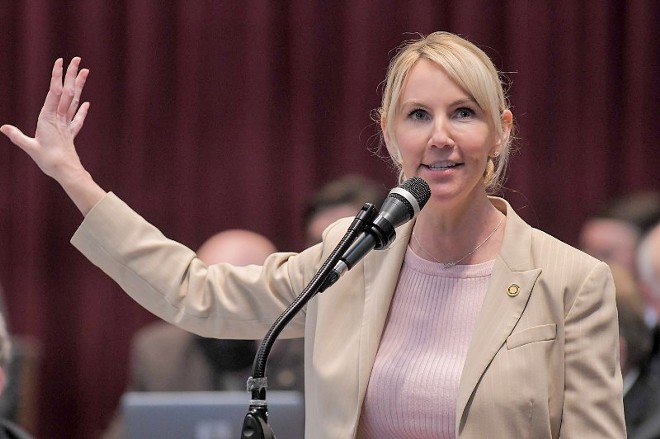 Both Coleman and Bailey’s bills have definitions that closely resemble those in bills filed across the country.

For example, Bailey’s bill defines hate speech as “a phrase concerning content that offends an individual’s personal moral code.” It’s a similar definition used in bills on the topic in at least 11 states.

Coleman is also sponsoring House Bill 1193, which would establish the “Human Trafficking and Child Exploitation Prevention Act,” another measure Sevier has pushed nationwide that would require a $20 fee for users to unblock access to websites facilitating human trafficking, prostitution or pornography.

Coleman said a woman from St. Louis had approached him about that bill, not Sevier.

In the lawsuit against Baker, Sevier claimed credit for authoring a similar version of the bill filed by Rep. Jim Neely in 2018.

Similar bills have been filed in years past. A bill filed last year by Rep. Tom Hannegan, R-St. Charles, that included provisions of both the acts was withdrawn a little over a month into the session. Hannegan said he did so because the bill wasn’t a good fit for what he was trying to achieve.

“Somebody sent an email, I think, pretty randomly out and just was saying what it was,” Hannegan said. “And it looked like something that I might be interested in, but it just wasn’t the route that I wanted to go down.” 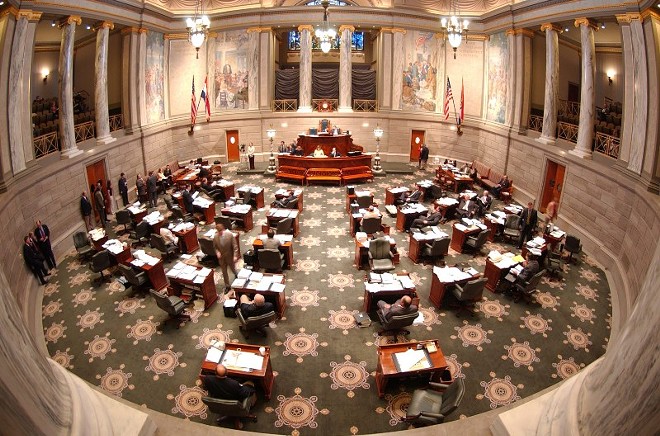 COURTY MISSOURI SENATE
A view of the Missouri Senate chamber from the visitors gallery.

As a result, Baker, the Missouri Senate administrator, sent an email to lawmakers and staff warning of “jittery and/or suspicious” interactions with Sevier and reminding them to notify Capitol Police any time they’re in situations in which they feel uncomfortable or threatened, according to The Kansas City Star.

A week after Baker’s email, Sevier filed a lawsuit against him.

In the lawsuit filed in the U.S. District Court for the Western District of Missouri, Sevier accused Baker of stalking him, deploying a hoax and colluding with the Democratic Party and media organizations who reported on the email, which the lawsuit argued resulted in defamation and emotional distress.

Sevier asked for $36 million in damages and that Baker — who the lawsuit repeatedly refers to as “Dishonest Defendant Baker” — issue a retraction, apology and correction.

Sevier argued there was no basis for the email and that Baker “floated this hit piece to cause legislatures to shun and avoid the Plaintiffs…” Both Sevier and another activist with Special Forces of Liberty were listed as plaintiffs. The lawsuit also listed a litany of other alleged motivations, such as hating Christians and supporting what Sevier’s proposed legislation is attempting to stop.

“The evidence will show that Defendant Baker and others published the false and defamatory statements because they are proponents of child molestation,” the lawsuit alleged.

The lawsuit was dismissed the same month it was filed.

Asked about Sevier being back in the Capitol, Baker referred to his previous comments in 2019. Trevor Fox, a spokesman for the Missouri House, said there was no action taken by the House in 2019 regarding Sevier.