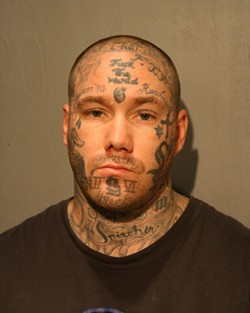 Plenty of the best fans in baseball have St. Louis Cardinals tattoos, just not on the face -- or next to a tattoo for the Chicago White Sox.

Richard Magnan faces involuntary manslaughter charges for accidentally shooting and killing his friend and fellow gang member, according to the Chicago Sun-Times. But what caught Daily RFT's eye is his astonishingly eclectic collection of facial tattoos.

Magnan has the STL logo for the Cardinals tattooed on his chin, just below the cursive "Gangster" tattoo he wears instead of a mustache. And on his left cheek, below a similarly unique pairing of a Jewish Star of David and a Christian cross, he wears the "Sox" logo for the Chicago White Sox.

It was not immediately clear if Magnan picked his favorites from both the National and American leagues or if he just really hates the Chicago Cubs.

Magnan was showing friends the gun he keeps for protection in a Walgreens parking lot over the Fourth of July weekend when his gun went off, striking Joel Bentley, another suspected member of the 2-6 street gang, in the abdomen, according to the Sun-Times.

Magnan fled the scene, but police arrested him Monday at a nearby hotel. He later admitted to shooting his friend, and he is being held in lieu of a $3 million bond.