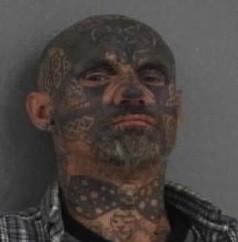 It's hard to decide what's more bizarre: Michael Eugene Campbell's mugshot or the explanation he reportedly gave to police when he was accused of assaulting a woman.

First, take a good look at the mug to the right. Pretty weird, right? (Is that a bowtie!?)

Now, let's review the charges against the Springfield man. An official in Greene County tells Daily RFT that, according to a probable-cause statement, after an instance of domestic violence, Campbell last week was charged with one count of third-degree assault, a class A misdemeanor.

The terrible injuries the woman sustained, however, seem to tell a different story.

See also: - This is The Scariest Mugshot We've Seen in a Really Long Time - Burglary Suspects Up to Their Necks in Trouble and Tattoos - Photos: Top 20 Scariest Face Tattoo Mugshots

The statement says that a woman suffered visible injuries to her mouth and face, including a large cut inside her lip and swelling and purple bruising around her right eye. It's unclear what their relationship is.

"He said that she was playing with the dog and that she fell down and had injuries to her face," the official tells us, referencing the probable-cause statement.

He was charged last Tuesday.

"The victim said that he punched her numerous times and choked her until she almost became unconscious," the report adds.

It would seem that cops did not exactly buy his version of the story.

He was sent to a Greene County jail and does not have an attorney listed online.

And now for your viewing pleasure, a larger version of that mug.

And a closeup on the neck there, because, why not?