Temporary Reprieve from a Temporary Governor 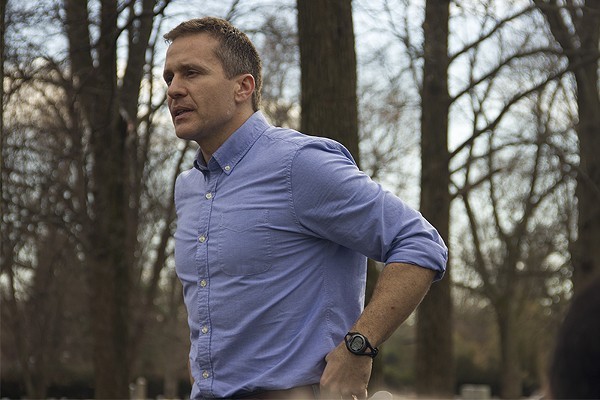 DANNY WICENTOWSKI
Then-Governor Eric Greitens convened a board of inquiry but resigned before it could issue its findings.

Marcellus Williams was on the sure track to death before DNA evidence interrupted his destiny. With the news of DNA evidence that seemed to exonerate Williams, the case drew national attention from anti-death penalty groups.

Missouri's constitution gives the governor power to "grant reprieves, commutations and pardons, after conviction, for all offenses except treason and cases of impeachment."A 1963 state law grants governors another alternative: the authority to "appoint a board of inquiry whose duty it shall be to gather information, whether or not admissible in a court of law, bearing upon whether or not a person condemned to death should be executed or reprieved or pardoned, or whether the person's sentence should be commuted."

With Williams' execution date looming, the Midwest Innocence Project wrote a nine-page petition to the governor asking him to appoint an independent board of inquiry.

Citing the DNA evidence that seemed to contradict Williams' guilt, Greitens halted the execution and appointed a board to "consider all evidence presented to the jury, in addition to newly discovered DNA evidence and any other relevant evidence not available to the jury."

It was a step into almost unchartered territory. Very few boards of this type had been empaneled in the 54 years since state law first allowed them.

Former Governor Mel Carnahan created two in his seven-year term. Attorney Joe Bednar, who served as Carnahan's chief counsel, later described the boards of inquiry as "a unique process" that deals with "difficult and hard issues" that a governor has to try to balance with justice.

Greitens' order for Williams came less than five hours before Williams was scheduled to die. Williams' son, Marcellus Williams Jr., told reporters he and his father had been preparing for execution.

"Me and my father, we said our goodbyes. We said we loved each other, I loved him, he loved me," Williams Jr. said.

Spinden says, "Our charge was to primarily advise the governor on his response to the petition for clemency. That, of course, entailed looking at the evidence, but the primary focus was on how [Greitens] should respond to the petition."

But Greitens abruptly resigned less than a year later, before the board could present its official findings. Some advocates questioned whether Greitens might commute Williams' sentence in his final week in office.

His actions suggest he was willing to allow fact-finding, but in no rush to grant Williams a reprieve. Before leaving office in June 2018, Greitens pardoned people for a range of crimes: victims who killed abusers or rapists and individuals who were given what he felt were unreasonably long sentences.

Williams did not receive a commutation.

When CBS News asked Williams Jr. his thoughts on why Greitens didn't pardon his father, the son's response was bitter: